“In approaching Elite Syncopations with a contemporary lens, we discovered key learnings about some of the inspiration for MacMillan’s music and choreography in Black history and culture. Our equity partner Theresa Ruth Howard examined these cultural references in a company-wide presentation that she has captured in this article, hosted on her website MoBBallet. I encourage everyone seeing Elite to read it. We are grateful to Theresa and MoBBallet for helping us raise awareness of this influence and for supporting our education and growth.” 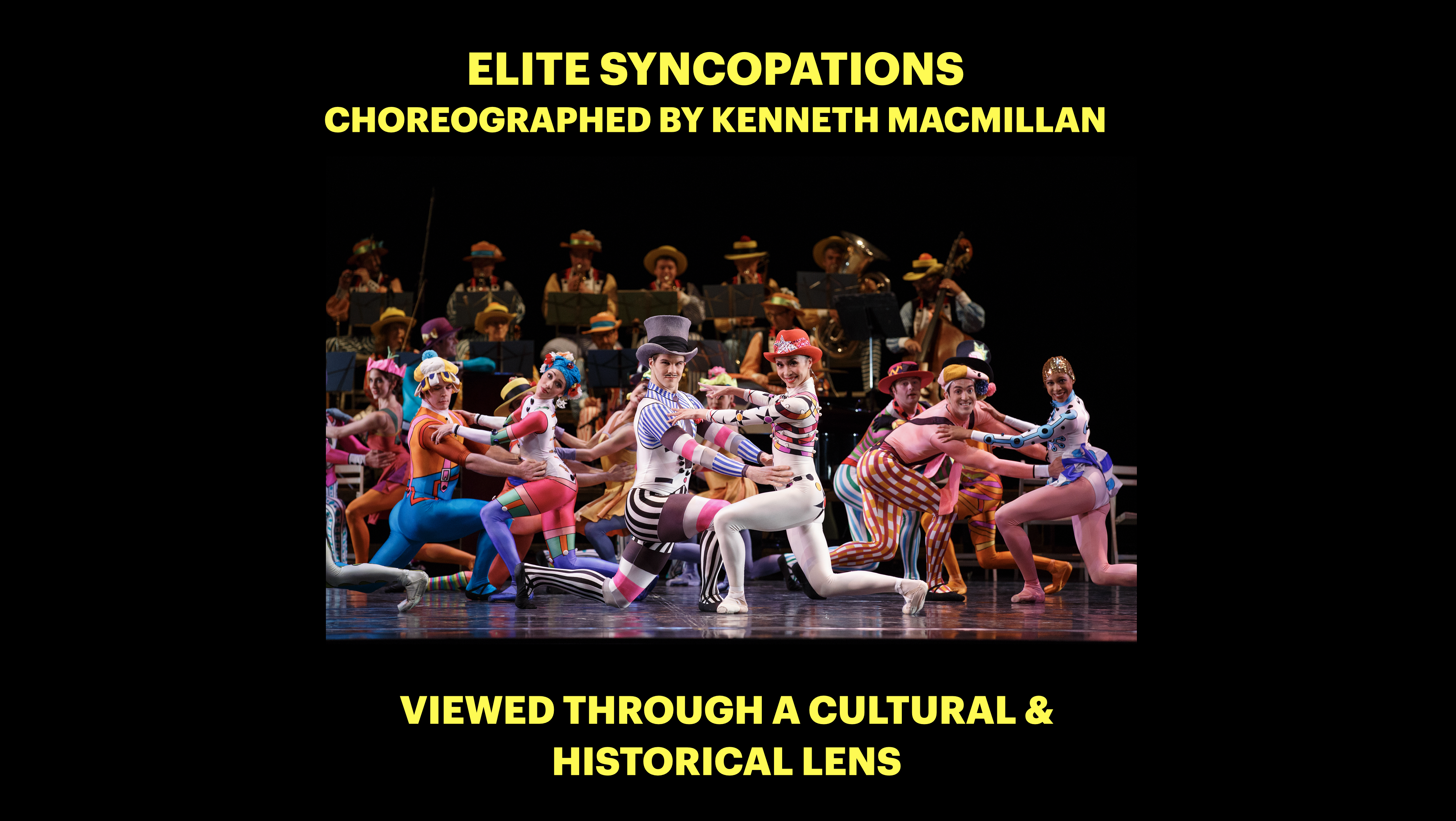 Elite Syncopations was premiered by The Royal Ballet on October 7, 1974 at the Royal Opera House, Covent Garden and choreographed by Kenneth MacMillan with costume designs by Ian Spurling, lighting designs by John B. Read and staging by Julie Lincoln. MacMillan had been planning a ragtime ballet even before George Roy Hill’s use of Scott Joplin’s “The Entertainer” as the title-track for his film The Sting revived popular interest in Joplin’s music. The ballet is described as having an upbeat, hip swinging aura of spontaneity, with “easygoing rhythms.”

The curtain opens as the Elite Syncopations cast dances wildly on a virtually bare stage. On a rostrum at the back is a band of twelve players led by a pianist (at the premiere Philip Gammon, with members of the Covent Garden orchestra). The band plays while the dancers perform in front of them, adding to the 1920s party-like atmosphere. The setting might be a competition in a louche dancehall in the Mississippi Delta at the turn of the last century, where the ballet’s characters flirt, dance and vie with each other for the limelight. There is no real plot, just a succession of rags, cakewalks and slow drags that demand virtuosity and comic flair.

MacMillan’s use of the Cakewalk, a Black social dance, as the movement aesthetic for Elite Syncopations

For the African American people, the tradition of nonverbal protest through dance has roots dating back to when the first stolen African peoples were stripped of their cultural identity and identifiers: their native tongues, drums, and their bloodline fragmented and scattered.

Using their creative ingenuity and technologies from home, they developed subversive ways to resist, preserve and survive. The body became a dancing drum in the creation of the dance of Juba, which was originally brought by Kongo slaves to Charleston, South Carolina. It became an African American plantation dance that was performed by slaves during their gatherings when no rhythm instruments were allowed due to fear of secret codes hidden in the drumming. In the mid-1800s, enslaved Africans integrated their indigenous dances with those dances of the white slaveholders to create the Cakewalk, which is the precursor to jazz dance. The Cakewalk was a way enslaved Africans could openly mock whites with impunity.

Entertained and enthralled, whites began to emulate the dance, thus affecting an imitation of themselves being imitated by Blacks. The dance got its name because often white slave holders would have slaves engage in dance competitions with the prize of a piece of cake.

The Cakewalk became wildly popular with whites and after an exhibition of the Cakewalk at the 1876 Centennial Exposition in Philadelphia, it became a staple of minstrel shows. This is highly important because during this time, the tail end of the reconstruction period, the Negro had enjoyed some social and political advancements. The character tropes of minstrelsy—Sambo, Mammy, Darky, the Dandy, and the Mulatto—were all used to undermine and chip away at the social, political, economic and personal advancement made by Blacks. Ironically, the use of the once subversive Cakewalk in the genre of minstrelsy was like a cruel reversal of the original intent of the dance. However, the sublimation of the Cakewalk from social to performative dance makes it very much like ballet.

Ephebism or Youthfulness: American art historian and writer specializing in Africa and the Afro-Atlantic world Robert Farris Thompson states, “People in Africa, regardless of their actual age, return to strong, youthful patterning whenever they move within the streams of energy which flow from drums or other sources of percussion.” This quality is characterized by strength, flexibility, speed, and intensity in all parts of the body. Flexibility in this sense isn’t about extensions or doing splits, but rather a flexibility in the joints.

Coolness: This quality often has to do with presenting a calm demeanor while simultaneously performing movement described in the previous section, but is about more than that. Coolness also has to do with visibility and clarity; Farris Thompson states, “seams do not show, the whole is moving towards generous conclusions based on total giving of the self to music and society.” Coolness is about having composure, but also giving everything to the dance.

The Creation of White Cool

African American choreographer and jazz tap dancer Buddy Bradley was born Clarence Bradley in Harrisburg, Pennsylvania; his parents’ names and occupations are unknown. Bradley’s father died when he was quite young, and his religious mother brought him up strictly. After seeing the tap dancers Jack Wiggins and Clarence “Dancing” Dotson at a local theatre, Bradley learned to do the time step on one foot by the time he was eight. He taught himself the Charleston, strut, drag, shuffle, and a vast assortment of African American vernacular dances from the deep South.

In the 1930s alone, Bradley choreographed over thirty musical productions in London, including Revels in Rhythm (1931); Words and Music (1932); Mother of Pearl (1933); Tulip Time (1935); Cochran’s 1936 revue Follow the Sun; Lew Leslie’s Blackbirds of 1936; and Evergreen, which was made into a film in 1934 and launched him into the emerging English film industry.

Bradley was a prime figure in the transplantation of African American jazz and tap dance onto the American and English musical theater stage. “His dance ideas were well ahead of his time, and knowing performers of the musical comedy stage flocked to him,” Bradley’s obituary in Variety (July 26, 1972) stated, “He was personally popular in the profession, together with respect given to his creative choreography.” 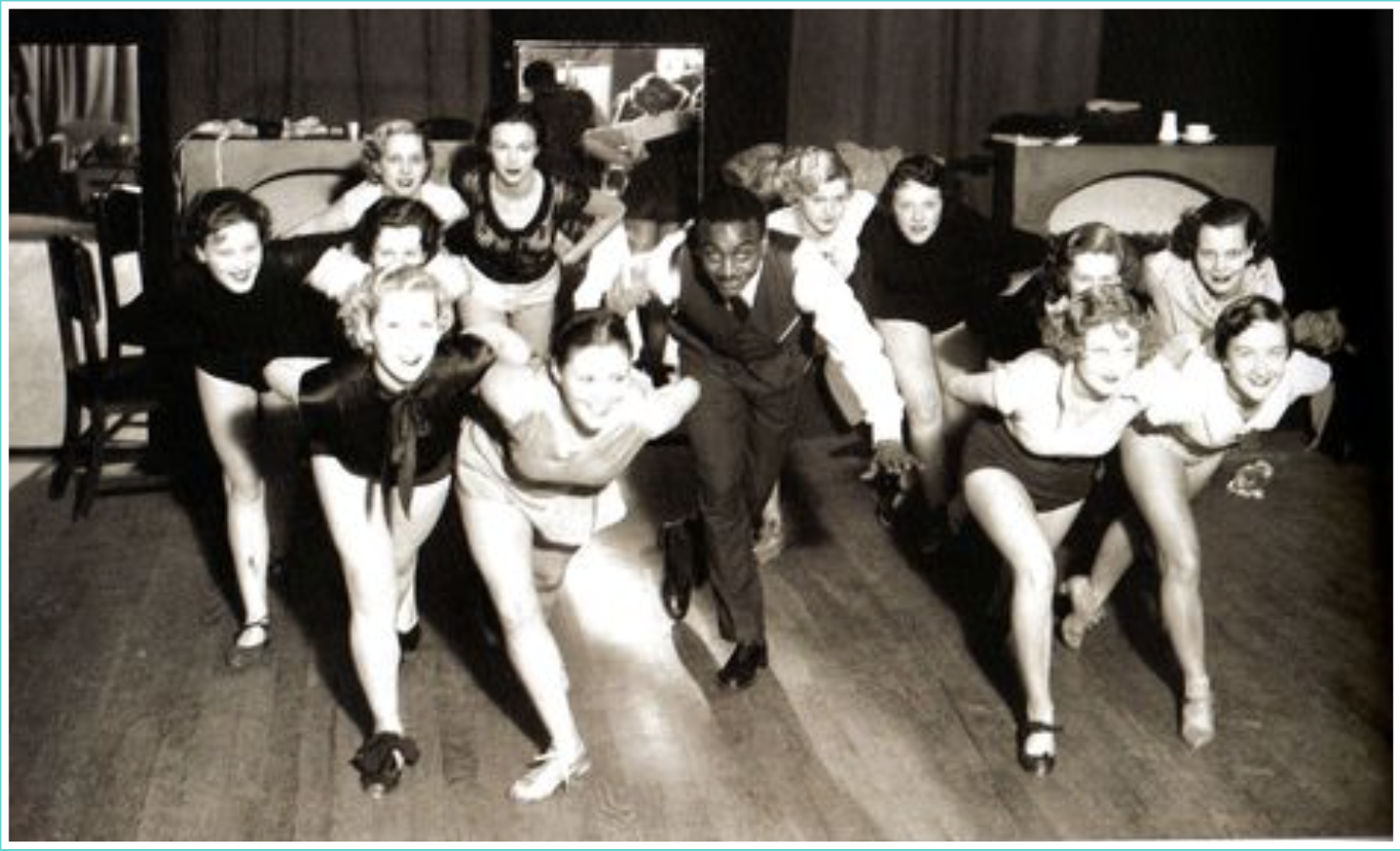 In “Glover and Dunn: A Contest of Beat and Feet,” Constance Valis Hill writes:

“Bradley’s formula for creating dance routines for white dancers was to simplify rhythms in the feet, while sculpting the body with shapes from black vernacular dances. Even though he simplified rhythms, he never sacrificed the syncopated accents of jazz, and he used the accents of jazz improvisations to shape new rhythmic patterns in the body.”

White cool is the result of the Africanist Aesthetic (music, dance, art) filtered through whiteness, siphoning off ethnic identifiers. The result is a contrived affect, slightly stiff and lacking flow. Movement can feel more forced than spontaneous, more awkward than organic. In dance, it presents as movement not quite sitting in the pocket of the rhythm, but just slightly off, as if it is always working to find the groove. In music, White cool can lack real swing and can sound “square” or tight.

Cultural White Washing through Appropriation in Movement and Music

Ragtime, the Father of Jazz

The style has its origins in African-American communities in cities such as St. Louis.

The first Ragtime composition to be published was “La Pas Ma La” in 1895. It was written by minstrel comedian Ernest Hogan. Kentucky native Ben Harney composed the song “You’ve Been a Good Old Wagon But You Done Broke Down” a few months later in 1896. The composition was a hit and helped popularize the genre. 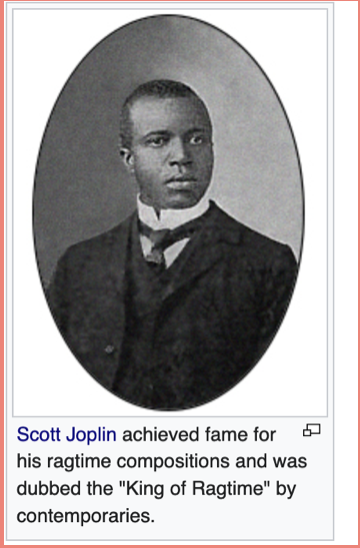 (ca. 1868–1917) became famous through the publication of the “Maple Leaf Rag” (1899) and a string of ragtime hits such as “The Entertainer” (1902), although he was later forgotten by all but a small, dedicated community of ragtime aficionados until the major ragtime revival in the early 1970s. For at least 12 years after its publication, “Maple Leaf Rag” heavily influenced subsequent ragtime composers with its melody lines, chord progressions or metric patterns.

In a 1913 interview published in the Black newspaper New York Age, Scott Joplin asserted that there had been “ragtime music in America ever since the Negro race has been here, but the white people took no notice of it until about twenty years ago [in the 1890s].” 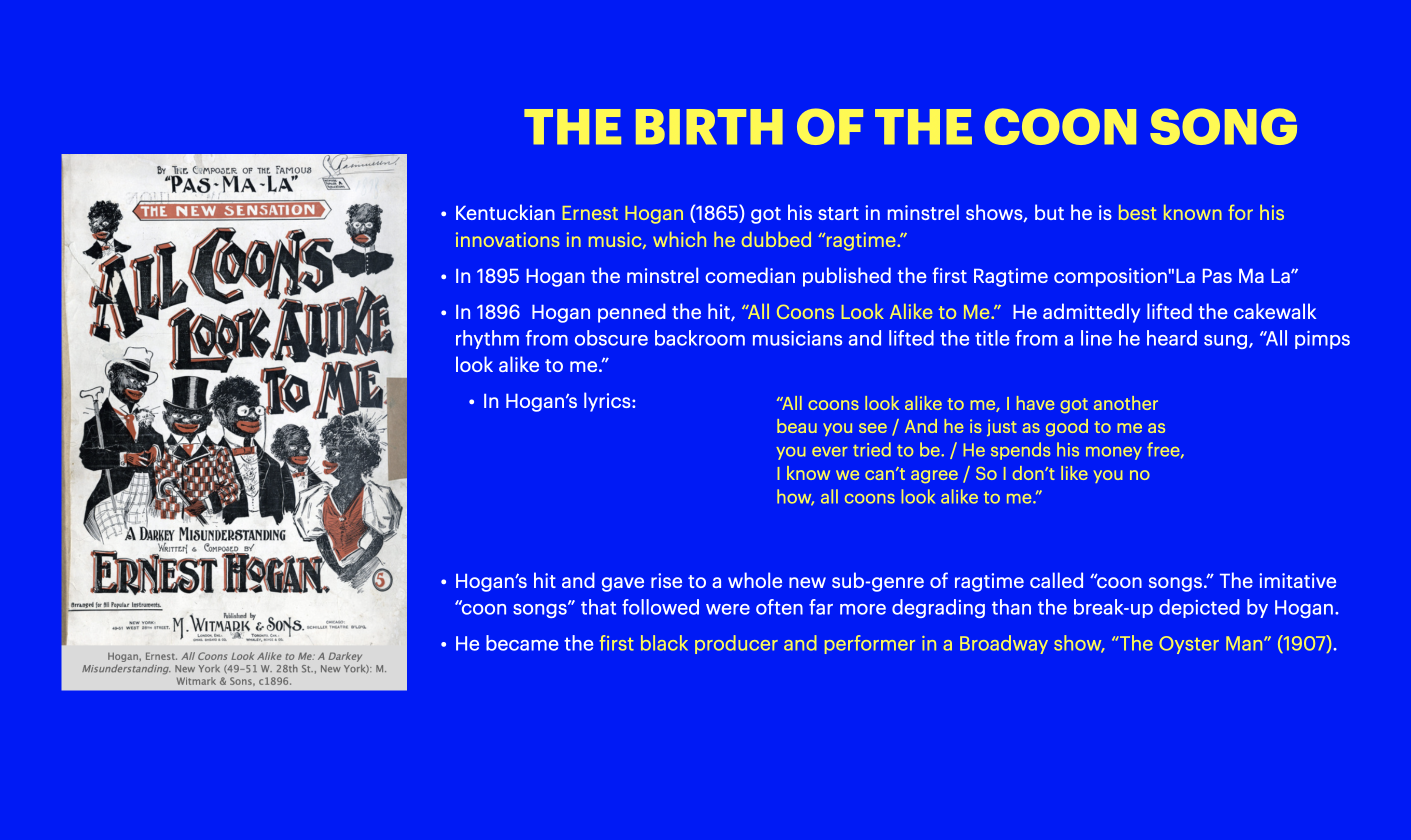 What is Cultural Appropriation?

“The adoption, usually without acknowledgment, of cultural identity markers from subcultures or minority communities into mainstream culture by people with a relatively privileged status.” (dictionary.com)

According to critics of the practice, cultural appropriation differs from acculturation, assimilation, or equal cultural exchange in that this appropriation is a form of colonialism. When cultural elements are copied from a minority culture by members of a dominant culture, and these elements are used outside of their original cultural context (sometimes even against the expressly stated wishes of members of the originating culture), the practice is often received negatively.

Cultural appropriation is considered harmful by various groups and individuals, including Indigenous people working for cultural preservation, those who advocate for collective intellectual property rights of the originating, minority cultures, and those who have lived or are living under colonial rule. Cultural appropriation can include exploitation of another culture’s religious and cultural traditions, dance steps, fashion, symbols, language, and music.

Those who see this appropriation as exploitative state that cultural elements are lost or distorted when they are removed from their originating cultural contexts, and that such displays are disrespectful or even a form of desecration. Cultural elements that may have deep meaning to the original culture may be reduced to “exotic” fashion or toys by those from the dominant culture. Kjerstin Johnson has written that, when this is done, the imitator, “who does not experience that oppression is able to ‘play’, temporarily, an ‘exotic’ other, without experiencing any of the daily discriminations faced by other cultures.” The academic, musician and journalist Greg Tate argues that appropriation and the “fetishising” of cultures, in fact, alienates those whose culture is being appropriated.

This is a financial aspect to cultural appropriation: the commodification of the culture that has the appropriator earning money in a way that the originators are unable to.

Along with not reaping the financial rewards of their creations, another deleterious effect of cultural appropriation is that originators are not ascribed ownership or cited in any way. Because marginalized people lack the means, resources, mechanisms to produce and have been disenfranchised in business (distribution, platforms of promotion and sales), they are at the mercy of the oppressive system. Whites (both as producer and spectator) are transferred ownership through omission while reaping the monetary benefits and creating generational wealth. A great example of this is the Black social dance The Black Bottom.

The Black Bottom replaced the Charleston in popularity. The dance originated in New Orleans in the first decade of the 20th century. Jazz pianist and composer Jelly Roll Morton wrote the tune “Black Bottom Stomp,” its title referring to the Black Bottom area of Detroit. Originating among African Americans in the rural South, the Black Bottom eventually spread to mainstream American culture and became a national craze.

However, when you research Black Bottom, it is difficult, if not impossible, to find the original Black bodies performing the movement. Therefore, the truth of its origin is obscured. This is the power and the danger of cultural appropriation.