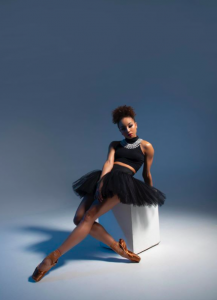 Born in Utah and raised in Texas, Stephanie Williams received her early training at Dallas Dance Academy with Fiona Fairrie. Ms. Williams made her professional debut with Ben Stevenson’s Texas Ballet Theater in 2006-07, and she most recently danced as a company member with the Francesca Harper Project and Ballet Black. Ms. Williams was an apprentice with Complexions in 2009 and has also studied during summers at The Juilliard School, Alonzo King LINES Ballet, and Houston Ballet’s Ben Stevenson Academy. Williams was a fellowship recipient at The Ailey School, a 2006 National Foundation on the Arts award winner, a 2006 Youth America Grand Prix finalist, and a 2004 Texas Commission on the Arts Young Master. Williams is now a member of Dance Theatre of Harlem.