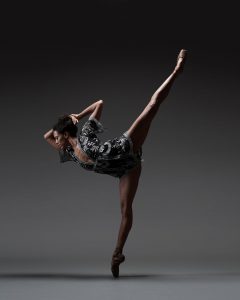 Lindsey Donnell is an artist with the critically acclaimed ballet company Dance Theatre of Harlem with which she has toured the world with a message of hope and unity. She was born and raised in Midland, Texas, where she studied ballet under Judy Coleman and Susan Clark followed by her time at Butler University, where she earned degrees in Dance-Arts Administration and Journalism. She began her professional career with Nashville Ballet until Dance Theatre of Harlem invited her to join for the company’s celebrated return in 2010. Donnell has performed for world leaders in Honduras, Israel, Turkey, Poland, and at the White House for former First Lady Michelle Obama. Witnessing the power of art to create change led Donnell to speak at TEDxBroadway 2016 and be a featured artist for the One World Trade Center opening. Most recently, she was a soloist at the 2017 Kennedy Center Honors for Carmen de Lavallade. Among her performance highlights are works by George Balanchine, Nacho Duato, Alvin Ailey, Dianne McIntyre, and Annabelle Lopez-Ochoa. Donnell has a passion for nature, the sense of touch, her mentor Charla Genn, timely sparkle, her family, coffee, pastries, and fabulous outfits.