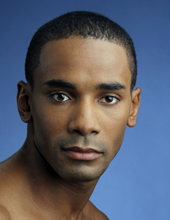 Born in Maywood, Illinois, Craig Hall began his dance training at the age of four at Stairway of the Stars with Lois Baumann. At age 14, he began studying with Anna Paskevska at the Chicago Academy of the Arts and also studied at the Ruth Page Dance Foundation with Larry Long. He attended the School of American Ballet’s 1996 and 1997 summer courses before enrolling as a full-time student in the fall of 1997. He was named a recipient of SAB’s Rudolf Nureyev Scholarship for the duration of his training at the school, and in 1999 he was awarded SAB’s Mae L. Wien Award for Outstanding Promise.

During his final year at SAB, Mr. Hall originated the principal male role in Christopher Wheeldon’s Scènes de Ballet, which premiered during NYCB’s 1999 spring season and was performed at that year’s SAB Workshop Performances. In October 1999, Mr. Hall became an apprentice with NYCB, and he joined the company as a member of the corps de ballet in February 2000. Mr. Hall was promoted to soloist in May 2007.

Upon his retirement from performing in 2016, Mr. Hall joined New York City Ballet’s artistic staff as a ballet master. He is currently a member of the company’s four-person interim artistic team.