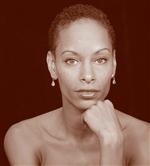 Kellye Gordon-Saunders began her ballet training at the Jones-Haywood School of Ballet in Washington DC, after which she went to Cannes, France, and spent two years at the Centre de Danse International, a dance school founded by Rosella Hightower. Upon Gordon-Saunders’ return to the United States, she was invited to join the Dance Theatre of Harlem (DTH), where she was a principal dancer. At DTH, Ms. Gordon was featured in the Four Temperaments, Serenade, and Dialogues and danced the title roles in Stravinsky’s Firebird Suite and DTH’s Creole Giselle. Ms. Gordon has also performed with Ballethnic Dance Company, the Maryland Ballet, and in the Broadway production of The Red Shoes.