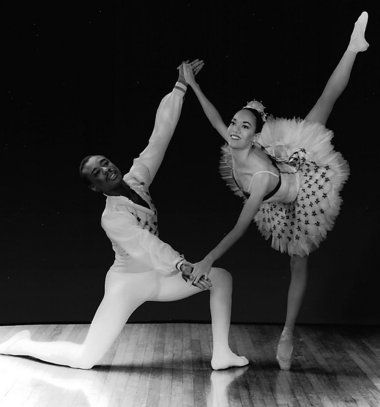 Tassia Hooks is the former associate artistic director of Wealthy Theatre Contemporary Ballet. She began her dance training with the Jane Stamps School of Dance and continued her training on scholarship at the prestigious San Francisco Ballet School. In 1984, Mrs. Hooks-Johnson joined The Dance Theatre of Harlem where she performed feature roles in Jeffery Holder’s Dougla, Valerie Bettis’s A Street Car Named Desire, Billy Wilson’s Concerto in F, Ron Cunningham’s Etosha, John Tyrus’s Fire Bird, Alvin Ailey’s The River, Robert Garland’s Joplin Dances, Alonzo King’s Signs and Wonders, The Nutcracker, and George Balanchine’s The Four Temperaments. As a choreographer she has produced many dance pieces from the dramatic to the abstract, which cross all styles and disciplines, ranging from ballet to jazz to contemporary lyrical and modern. She has produced works for the Dance Institute of Washington (including their production of A Soulful Christmas, which was performed at the world famous Kennedy Center), the Grand Rapids Symphony, School of Grand Rapids Ballet, and Kansas City Friends of Alvin Ailey. Her ballet Belinda–O was a winner in the New York City-based New Choreographers on Point competition and was performed at the Lincoln Center in 1995. She continues to be in demand and has been commissioned to do choreography for competitions and performances. The Flint Youth Ballet requested Mrs. Johnson to be a part of their Color Line Project in 2003, which explored racism past and present called Episodes at the Mall. It was a huge hit with the PRESS, dancers, and audiences. Students have done very well with Hooks-Johnson’s choreography in competitions and have placed in the top 10 at YAGP 2013. Hooks has had students who have been accepted to schools on scholarship and company training programs. Her works have always been well received and have won many awards. In addition to her accomplishments as a dancer and choreographer, she is also known for her great teaching experience. As a teacher and mentor, she has worked with many dance organizations and schools such as the Dance Theatre of Harlem, Kansas City Friends of Alvin Ailey’s Ailey Camp, T-3’s Dance Elite, CARE, Dance Dimensions, Turning Point, and Grand Rapids Christian High School. In 2008, Mrs. Johnson began teaching at Blue Lake Fine Arts Camp annually, staging excerpts from Sleeping Beauty and choreographing original classical and neo-classical works for the campers. As co-artistic director of the Hearts In Step ENSEMBLE, she has collaboratively written and choreographed full-length story ballets The Door, HISSY, Revival at the Hive, The Parable About the King, The Toy Maker’s Son, and Ark. Other organizations that she has worked with are Hark-Up Christmas show, Story Theatre Kids in Muskegon, Kickin’ It Summer Dance program at Muskegon Community College, and the Grand Rapid Dance Project. Mrs. Hooks-Johnson is wife to Mr. Patrick Johnson, and they are co-owners of PT Arts, LLC, a Performing Arts Consultation Company.