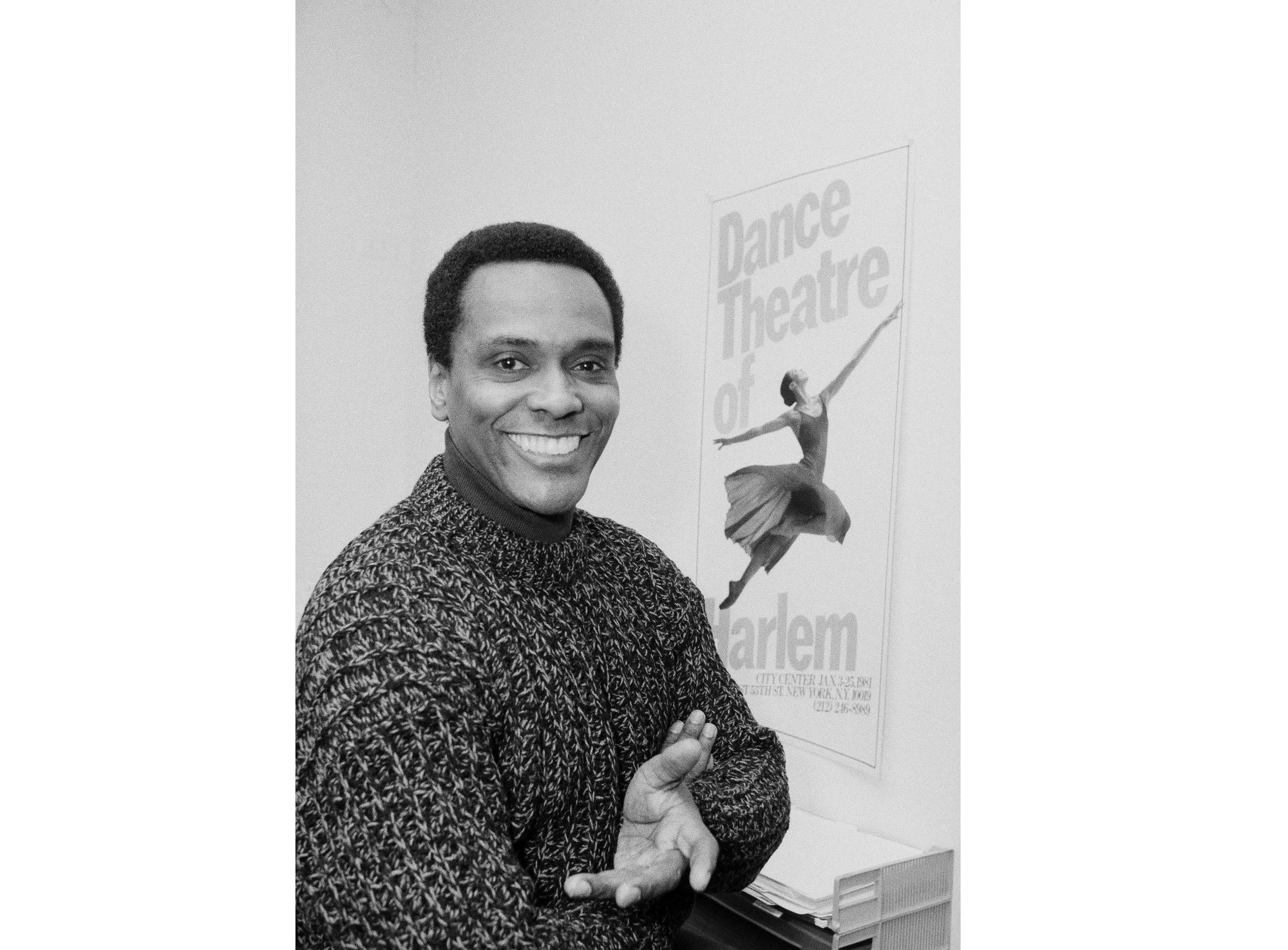 Last Wednesday, Dance Theatre of Harlem co-founder and ballet pioneer Arthur Mitchell died. He was 84 years old and, though vibrant and tenacious as ever, this past year the toll that illness and age were taking on him was visible.

In October when he hosted “An Informal Performance on the Art of Dance” to celebrate the donation of his archives to Columbia University’s Rare Book & Manuscript Library and the upcoming Wallach Art Gallery Exhibition, he shared that his recent hip surgery left him requiring a shoe with a lift. He acknowledged his “altered state” with panache, that side-eyed smirk catching the light with a cheek bone, and ending with a chuckle that broadened to a dazzling open-mouthed smile.

Mr. Mitchell’s acute awareness of his pulchritude and charm, and the adroit manner in which he wielded them, have always been key factors of his influence.

Ever the showman, he introduced each piece, being quintessential “Arthur Mitchell”: inspiring, anecdotal, highly-praising yet sometimes throwing shade as he delivered witty commentary that made the audience laugh, reflect and shake our heads in awe—of him. He was in his glory. 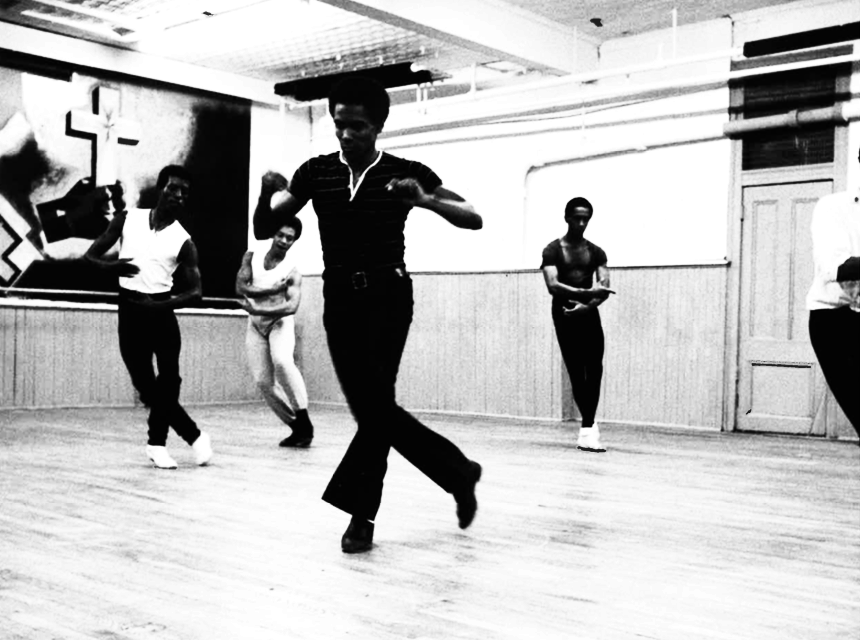 I joined his company in 1989, but I first encountered Arthur Mitchell when I was 8 years old. Dance Theatre of Harlem was in Philadelphia with a mixed bill program called “Doin’ It.” The second act opened with a ballet barre featuring 12 local ballet students—including me.

I was in awe. For so long, I had been the only black girl in my classes both at Baldwin Academy for Girls and Pennsylvania Ballet. I could hardly believe that there were other black people who did ballet and just as well as the company dancers I had been idolizing. Mr. Mitchell was so loud and grand. I had never seen the likes of him. He was larger than life, like a superhero. Today I would say that he seemed like the Black Panther—invincible, impenetrable, immortal. 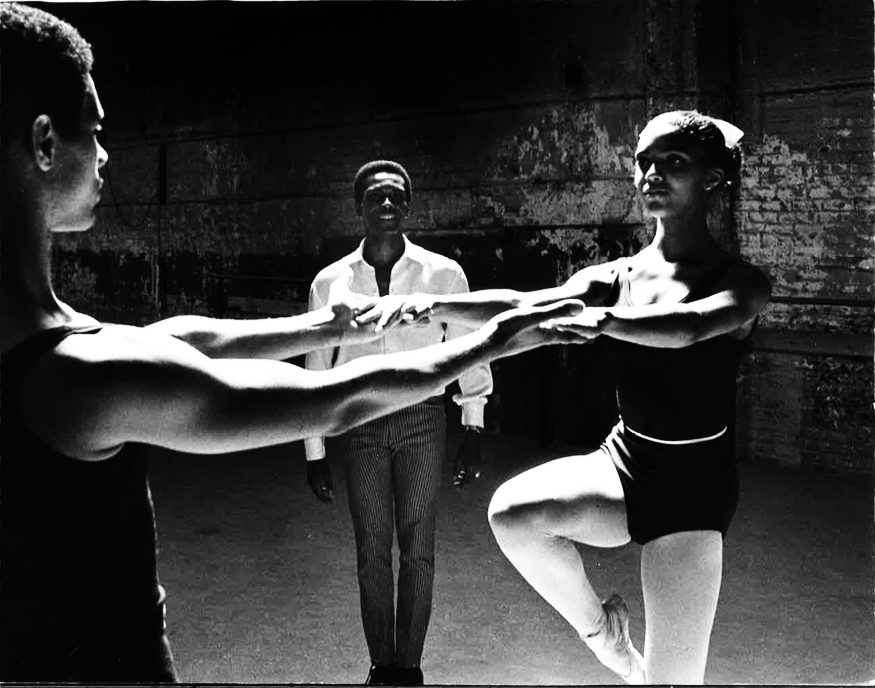 But it was within his humanness that the complexity and contradiction of Arthur Mitchell was found. A black man born and raised in Harlem, coming of age in 1950s America, he would become the first permanent black principal of New York City Ballet, and the co-founder of the first black ballet company in the world.

He almost single-handedly inspired and gave opportunities to thousands of ballet dancers of color, showing the world that indeed, “Yes we can” and just as well—if not better than most—and with a little Harlem flair.

He showed young brown dancers not only how to traverse the world, but how to navigate in it when it was hostile to their presence. “Stand up straight, chest up, head up, eyes up” were not just concepts in ballet, but something that he taught dancers to take out beyond the streets of Harlem. He taught us, “You represent something larger than yourself”: DTH, our parents, our city, our country, our race. And he made us proud to own all of them. 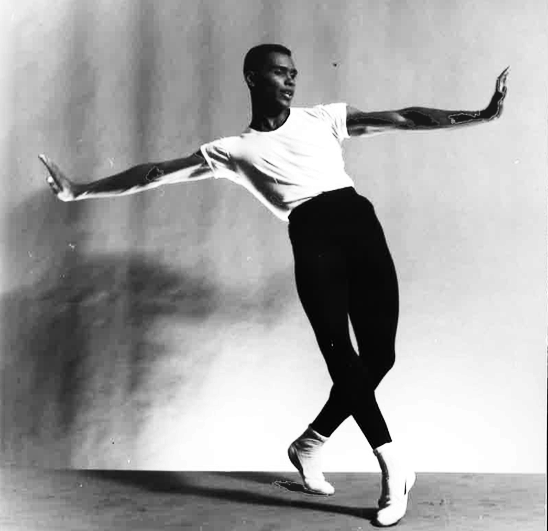 He was a true product of his era: the Black Power movement of the ’60s, a time when blacks were “Beautiful” and making breakthroughs. His friend circle included pop star Harry Belafonte, opera singer Jessye Norman and actress Cicely Tyson. It was a time when newly-affluent blacks were testing the boundaries, balancing success, fame and influence with social justice. The civil rights movement was cresting just as they were, and the architects understood the importance of aesthetics. By protesting in their Sunday best, the movement visually rebuked the stereotypes that criminalized the black body in America. Mr. Mitchell was a master of presentation in appearance, speech and comportment, and he insisted in the same for his students, dancers and employees.

The manner in which he doled out lessons about comportment, hair, make-up, the company you kept, and even your sexuality ranged from courtly to crass: “Miss, you need to put some lipstick on—you can’t dance beautifully if you don’t look and feeeel beautiful”; “Don’t be precious dear…I don’t care who you sleep with, but I want to see men on stage.”

He could use your personal information to illustrate a point; he loved to tell you what your problem was. I remember being 12 years old in my first DTH summer intensive, in Homer Bryant’s partnering class, and as Mister (as he was affectionately referred to) was wont to do, he hijacked the class and began teaching. He said to me, “Philadelphia, ah I see, I see. Your problem is you want to be in charge, you’re trying to lead, you’re too bossy. I remember when I saw you in Philadelphia and you told your father,” he put his hand on his hip, ” ‘I’m going to New York,’ and I said well look at this…”

Although he was not always wrong in some of his assessments and critiques, it was always through his lens of cultural neutrality. There was little space for being an individual. He was a student of the respectability politics. Mr. Mitchell bore no markings of his Harlem zip code. His clear diction was that of a prep school student, his attire was tailored and tidy, his hair always neatly groomed. He knew the power and privilege of presenting as a “non-threatening negro” to whites to gain access and support. Then, through art, he knew he could break barriers and change minds. He was the empirical evidence that this worked and it was his mission to mold us in his image.

His Dance Theatre of Harlem was like a stealth artistic army fighting for social justice. Our weapons were ballet, elegance and class. 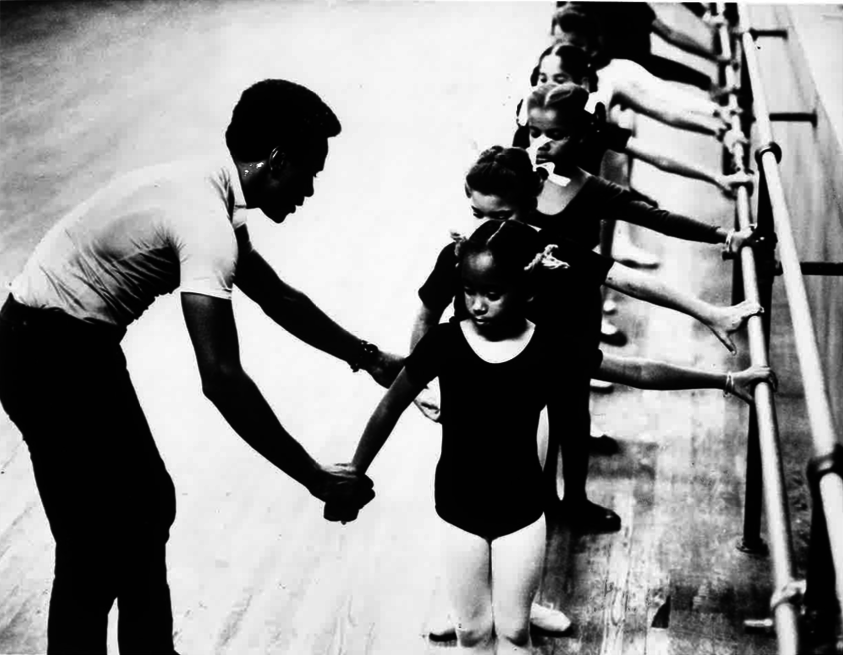 Mitchell was known to hijack other teacher’s classes when he wanted to give a lesson. Photo courtesy DM Archives

For most who have been in the DTH trenches, we had complicated relationships with the man who influenced, inspired, encouraged us and to whom owe our careers. Like many artistic directors, Mr. Mitchell was a father figure. As a parent, he was hard on us—and often most brutal on the ones he deemed most talented. Black parents discipline their children with a heavy hand because the world is harsher and our consequences are not the same.

I would not be divulging a secret when I state that, amongst many things, Mr. Mitchell was a difficult man. He was old-school “break you down to build you up,” if could people hang in there for the “build you up” part. For some, the faint marks of nicks and cuts are just ironic stories; for others, the wounds go deep and decades later are still too sensitive to touch.

These lessons he taught us enabled us not only to trip the lights fantastic but to move through the world with the confidence, assurance and an unflappable sense of self, knowing we are worthy, and yet clear about the the ugly reality of racism.

But as with any great education, it came with a cost. If you could not, or would not capitulate, there was a price to pay. Those who were independent thinkers, too flamboyant or defiant, he would try to break. I was one of those, untameable. I came into this world with a fully-formed sense of self, and could not be told who or what I was. I was raised with the knowledge that I have a voice and was encouraged to use it.

I remember once in a tech rehearsal for Serenade, the big diagonal before the corps runs off was not right. After repeating it, Mr Mitchell determined that it was my fault. The god mike boomed: “That’s the problem: She’s looking at the downstage girl when you should be watching the upstage girl.” The week before, Victoria Simon from The Balanchine Trust had expressly said to use the downstage girl as your guide. I was pissed. I moved forward and began to tell him this when I felt hands on me pulling me back. I felt all the eye of the elders silently urging me not to do it. “Let it go,” I heard. It was a long time before I learned to manage that defiant streak.

Years later, Mr. Mitchell wanted me to dance for the company’s 30th anniversary. I met with him in his office, and we had a heart-to-heart. I shared how he had damaged my spirit, and he was shocked that I was still hurt. He told me he treated me harshly because he was mad at me for not understanding my talent. He thought I didn’t take it seriously. I told him, “You should have asked me, not assumed you knew me. It was your responsibility to show me, teach me.” He didn’t refute it; he knew I was right. The truth is, I scared him. He didn’t know what to do with or how to handle me. 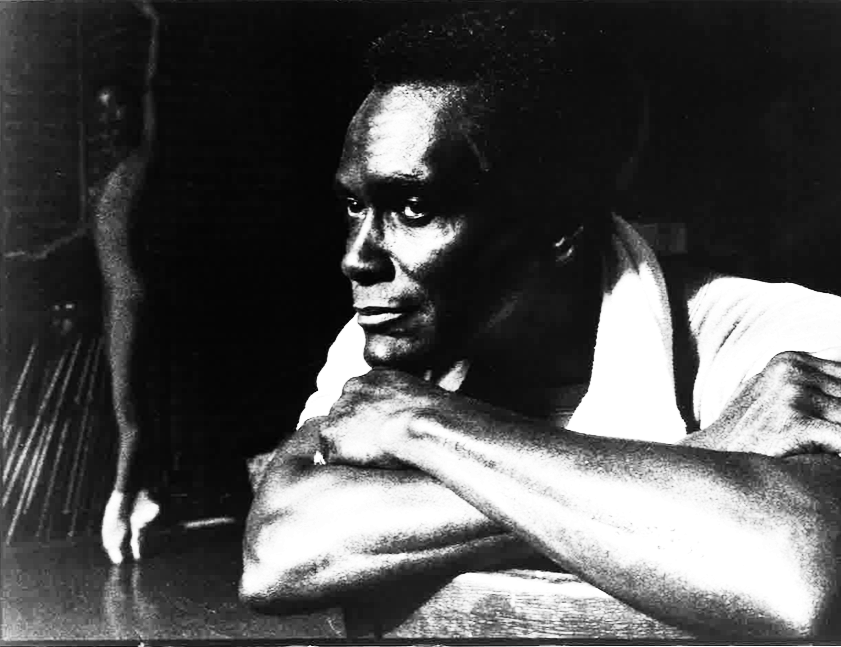 Over the years, I have been able to sift through my memories of and emotions for Mr. Mitchell. When I’m teaching, I giggle internally when I hear him come out of my mouth or when I teach a Mr. Mitchell classic, like the port de bras that opens from fifth en haut: “give” (to the audience), “take” (turn your head away as you close en bas), and “show” (snap our head out over the shoulder, chest high, eyes bright, “Zah!”).

I even made my level 5 girls at The Ailey School wear red lipstick; that is how people identified “Ms. Howard’s girls.” He’s in there.

Mr. Mitchell’s flame burned so brightly that it illuminated the world and cast all who fell beneath it in a most becoming light. People were drawn to him, to the iridescent glow. Many bear scars for having touched the sun, but in doing so were transformed by it, rose from those ashes and were made better for it. You will find precious few who will do not revere, respect and dare I say love him.

The DTH family grieves not just the loss of the man who helped make us, but also what he represented to us. He gave us a place to be somebody. The possibility, the hope, the opportunity, the courage, the audacity, the confidence, the pride. Another lesson Mr. Mitchell taught us was how to laugh, together and at ourselves. He had a wicked sense of humor, and there was nothing better than his thundering laugh.

Mourning is messy business, but we will do it in true DTH fashion, which includes elegance, class and zah! Let us sally forth as we were taught so well. He Gave, we Took, and now let us SHOW.