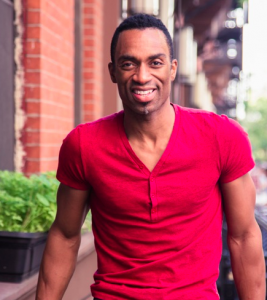 Desmond Richardson has been hailed by The New York Times as among the great dancers of his time. He has been a principal dancer with Alvin Ailey American Dance Theater, American Ballet Theatre and Ballet Frankfurt under the direction of William Forsythe.

Throughout his career, Richardson has danced on the most important stages throughout the world. He has appeared on Broadway as an original cast member in Fosse, as Tony in Twyla Tharp’s Movin’ Out and in the Burt Bacharach/Hal David production The Look Of Love.  Richardson has worked as a guest performer and choreographer in film and television, appearing in the Oscar-winning Chicago, Across the Universe and on the American and international editions of So You Think You Can Dance. He also has worked as a featured dancer for artists including Michael Jackson, Prince, Madonna and Aretha Franklin.
Richardson continually works to foster the next generation of artists with his internationally acclaimed dance company, Complexions Contemporary Ballet, where he serves as co-founder and co-artistic director with choreographer Dwight Rhoden. He has received a Tony Award nomination, the Dance Magazine Award, the Capezio Award, the LA Ovation award, a New York Performance Award (Bessie), the Young Arts Alumni Award and is a Presidential Scholar of the Arts.