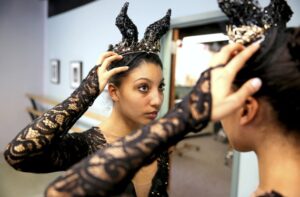 Elena Bello grew up in Jersey City, New Jersey, where she became a part of the National Dance Institute program. She then auditioned for and attended the School of American Ballet (SAB) in New York City. She spent four years at SAB and found her love for ballet. Bello moved to South Carolina to attend the South Carolina Governor’s School for the Arts and Humanities. After graduating, she continued studying at the Conservatory of Dance at SUNY Purchase before auditioning for Richmond Ballet. She then spent two years as an apprentice with the company, one year in Richmond Ballet II, and eight seasons as a part of the main company.

Diary of a Magic Doll: The Nutcracker as experienced by Elena Bello, rva news
These Dancers Pursued Passions Outside of the Studio—and Found Fulfilling Second Careers, Pointe