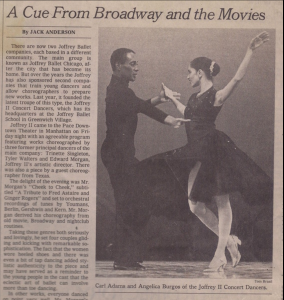 Carl Adams has performed throughout North America, Europe, and the Far East.

One of the first companies he worked for in Europe was the Vienna Festival Ballet, touring to Germany, Vienna, and the South of France.

After coming to the US, he danced and choreographed for Long Island Ballet.

He has worked with Miyamoto Ballet Theatre, with which he was choreographer and dancer. He also went on a mini-tour with the Chinese National Ballet.

Making his way back to the UK, Adams performed with Ballet Black at the Royal Opera House and on the West End stage in the Phantom of the Opera. He acted as an extra in the hit UK soap opera Holby City and in the film Gulliver’s Travels, starring Jack Black. More recently, he appeared as an extra in the BBC drama Luther and was a guest teacher for dance schools in and around the London area, teaching and coaching musical theater and ballet.