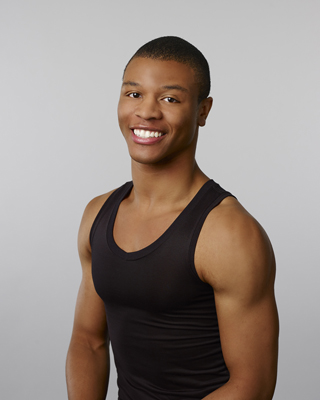 Keenan English began his formal ballet training at the age of 12 with the Baltimore County Youth Ballet. From there, he went on to attend the Baltimore School for The Arts. Upon returning for his senior year at the School For The Arts, he was invited to join the trainee program at Boston Ballet School, where he studied for a year under the Pao Scholarship. While there, English had the opportunity to perform with Boston Ballet in Romeo and Juliet, Don Quixote, The Nutcracker, and the Annual Gala. In the summer of 2012, he attended the summer course at The School of American Ballet and later that year enrolled as a full time student on the Carolyn Wright-Lewis Scholarship. During his two years at SAB he performed in Balanchine’s Serenade, Coppélia, and Western Symphony, which was a Live at Lincoln Center PBS Broadcast. He joined the company at Dance Theatre of Harlem for the 2014-2015 season. While there he danced works by George Balanchine, Nacho Duato, Ulysses Dove, Francesca Harper, Darrell Grand Moultrie, and Robert Garland. He then joined Cincinnati Ballet for the 2015-2016 season. English has attended summer courses at Miami City Ballet, American Ballet Theatre, Boston Ballet, and the School of American Ballet.