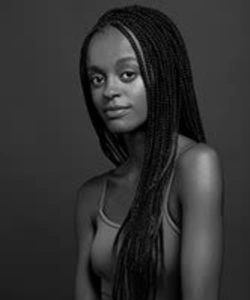 India Bradley is a member of New York City Ballet’s corps de ballet. She was born in Detroit, Michigan and began her dance training at the age of four at The Link School of the Arts in Troy, Michigan. At the age of 11, she attended the Academy of Russian Classical Ballet in Novi, Michigan, under the direction of Sergey Rayevitskey.

Ms. Bradley attended the summer program at Dance Theatre of Harlem in 2012 and entered DTH’s Professional Training Program under the direction of Andrea Long that fall.

She attended the 2014 summer session at the School of American Ballet, NYCB’s official school, and enrolled as a full-time student later that year.

Ms. Bradley was named an apprentice in August 2017 and joined the company as a member of the corps de ballet in August 2018. As an apprentice, she performed a featured role in George Balanchine’s The Nutcracker.