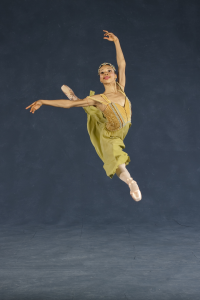 Christina Spigner is from Scottsdale, Arizona. She has trained at School of Ballet Arizona and Master Ballet Academy and graduated from Miami City Ballet School, where she was a full-scholarship student for two years. She attended summer intensives at Pacific Northwest Ballet, Ballet Maestro in New York City, and two seasons at the Interlochen Arts Camp. She has been nominated for the National Princess Grace Award and is the winner of three national contemporary competitions including New York City Dance Alliance and West Coast Dance Explosion. She has performed original works at Radio City Music Hall as a touring national title holder. She joined Miami City Ballet as a company apprentice in 2012 and was promoted to corps de ballet member shortly thereafter.

In 2016, Spigner had the privilege of being featured in the Black Iris Project’s debut performances in New York City. BIP is a unique ballet collaborative which creates new and relevant classical ballet works celebrating diversity and Black history.