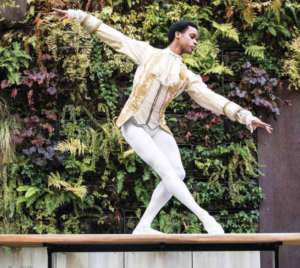 Brian Bennett is from Lanham, Maryland. He began his dance training in the competition circuit, where he performed tap, jazz, hip-hop, and contemporary routines across the United States. He began his ballet training in high school at Baltimore School for the Arts under the direction of Norma Pera. During this time, he was very fortunate to perform in ballets such as George Balanchine’s Serenade and Stars and Stripes as well as Martha Graham’s Appalachian Spring. He received scholarships to train at summer programs hosted by San Francisco Ballet School, The Joffrey Ballet School, American Ballet Theatre, and George Mason University. After high school, Bennett attended Butler University in pursuit of a Bachelor of Science in Arts Administration under the direction of Larry Attaway. At Butler he enjoyed dancing in ballets such as Giselle, George Balanchine’s The Four Temperaments, Paul Taylor’s Piazzolla Caldera, Swan Lake, and Gerald Arpino’s Viva Vivaldi. Bennett joined Oregon Ballet Theatre as a company artist in 2019.