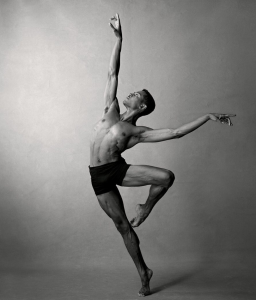 Jordan Faye started dancing at the age of seven and continued professionally in 2005 when he was admitted to the Conservatoire national de danse de Lyon. In 2006 he settled in Montreal and was admitted to the École Supérieure de Ballet du Québec. During his studies, he worked with several choreographers including Roberto Campanella, Andrew Skeels, and Gioconda Barbuto. Throughout his training, Jordan has explored the repertoire of George Balanchine and a number of other renowned choreographers. He took part in the Youth America Grand Prix in New York, where he was a finalist on three occasions. In 2013 he was awarded a grant to study at the Palucca School of Dance in Germany and in 2015 worked for the first time as a member of the corps de ballet in the Grands Ballets Canadiens production of The Nutcracker. Over the next two years he collaborated with various professional companies, such as ProArteDanza. He took part in Ballet Jörgen’s Summer Dance Intensive program in Toronto as a member of the junior company, which last year collaborated with Cirque du Soleil for one of their productions in China. Jordan joined Les Grands Ballets Canadiens as an apprentice for the 2019-2020 season.