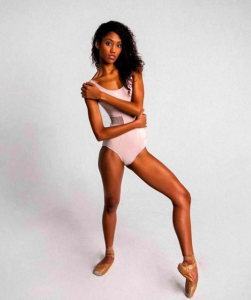 Nadyne Bispo is originally from Santos coast of São Paulo, Brazil. She started dancing at the age of four at Balé Jovem de São Vicente under the direction of Geyssa Alencar and Sabrina Olimpio. In 2012, she represented Brazil at Tanzolimp in Berlin, her first international festival. She graduated in 2015 at the age of 17 from the Balé Jovem de São Vicente. Nadyne participated in the Youth American Grand Prix (YAGP) three times and, in 2016, received a scholarship for the summer course and contract with Boston Ballet II. She attended the four-week summer intensive under the direction of Peter Stark. In 2018, Nadyne was a finalist at YAGP and she received an invitation to work with Atlanta Ballet 2 under the direction of Gennadi Nedvigin and Sharon Story, where she attended for two years (2018- 2020). In the same year, Nadyne received a gold medal in the Passo de Arte and was selected for the International Festival of Joinville. In 2020, she got promoted as apprentice member with Atlanta Ballet.

Stories from the Streets: Nadyne Bispo, The Streets