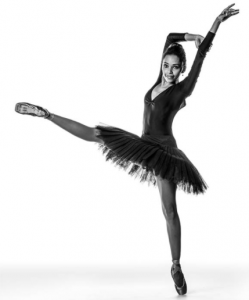 Monike Cristina was born in São Paulo, Brazil and started ballet at age six. She was awarded a scholarship to the Alvin Ailey American Dance Theater at the Youth America Grand Prix in New York and also won the jury award. In the same year, she was invited to participate in the Tanzolymp in Berlin.

In 2009 she began her association with Cedan (Cia Estável de Dança) and in 2012 was awarded the silver medal at the XX International Dance Seminar of Brasilia. In 2012 Cristina participated in Cuballet under the direction of Laura Alonso, dancing the role of Odette-Odile in Swan Lake. She was part of the Cia Jovem Do Teatro Bolshoi Brazil, performing in Paraguay and Switzerland. She was invited to be part of the tour of Black Swan and Virtuosos in 23 cities in Russia.

She joined Joburg Ballet in 2016, where she now holds the rank of senior soloist. With the company she has danced leading roles in Snow White, Carmen, Raymonda, The Sleeping Beauty, Giselle, and Don Quixote.

In 2020 she was invited by American dancer Misty Copeland to be one of 32 ballerinas from around the world to participate in Swans for Relief, an online initiative to raise funds for dance companies impacted by the coronavirus pandemic. Clips of the 32 dancers performing The Dying Swan were edited into a single performance of this fabled ballerina showpiece.