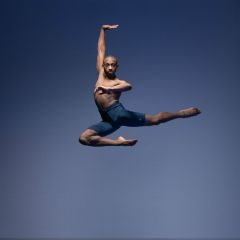 Alexander Fadayiro was born in Kingston-Upon-Thames and began his training at Dance Direction UK under the direction of Debby Tomlinson and Meryl Moreth. He also studied at Tring Park School for the Performing Arts before attending Central School of Ballet, graduating in 2019. Whilst there, he performed with The Royal Opera in Der Ring des Nibelungen and at the Royal Albert Hall for the Hertfordshire Schools Gala. He became a student associate in 2018/19 for Matthew Bourne’s Swan Lake and joined New Adventures Company as Lennox in Romeo and Juliet. Alexander joined Ballet Black as an apprentice artist in 2019 and made his debut performing in Mthuthuzeli November’s Ingoma.