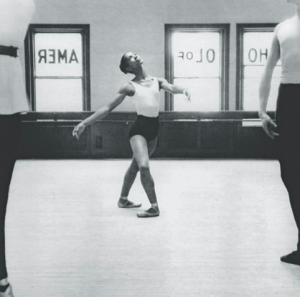 In a 2013 interview, Betty Nichols said, “I started at the School of American Ballet, probably in 1943. I was the first black in the school. I knocked on the door and presented myself. I thought there was considerable surprise, but the door was opened, and that was it.” She primarily studied modern during her time in Philadelphia and transitioned her focus towards ballet once she moved to New York.

1946 she became one of the members of Balanchine’s Ballet Society. Nichols toured with Balanchine in Europe before the company was established as New York City Ballet.

Nichols and Talley Beatty trained together at the School of American Ballet and were both asked to performed in Balanchine’s Ballet Society in 1946. The two danced in Blackface, a minstrel-themed ballet choreographed by Lew Christensen for the company. 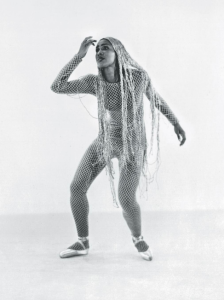 Nichols gained recognition through Ballet Society and became friends with Tanaquil (Tanny) Le Clercq, who was also a dancer with Ballet Society and later went on to marry choreographer George Balanchine. Nichols thought highly of Le Clercq; she said “Tanny had been fantastic in Ballet Society…something original” and used to say to her, “Kid, you’re great.”

In 1949, Nichols “decided that [she] was going to take every penny out of the bank and go on a three-month cultural vacation to Europe.” Her original companions, Hilda and Ana, were both unable to go; as soon as Le Clercq heard, she called and said “Betty, can I take Ana’s place?” Thus, Nichols and Le Clercq embarked on a trip to Europe together.

When they were in Paris, Nichols says that she and Le Clercq were walking on the pave of St. Chapelle when they heard “Betty! Tanny!” It was Merce Cunningham and John Cage, who said “We’re going to have a recital. You’ve got to do it with us.” Nichols knew Cunningham from SAB, and Le Clercq had danced Cunningham’s Seasons at Ballet Society. In this way, the two ballerinas danced a trio with Cunningham, after which Nichols stayed in Paris, while Le Clercq returned to America on her mother’s insistence.