The First Negro Classic Ballet company was established in 1946 by founder Joseph Rickard (1918-1994). 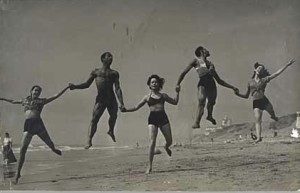 After Joseph Rickard witnessed an African American child being turned away from dance classes in Los Angeles, he established a school to train African Americans in classical ballet. He later founded the First Negro Classic Ballet. The company’s first recital was on October 19, 1946 in the Danish Auditorium on West 24th Street in Los Angeles; their first professional performance occurred on November 19, 1949 in Santa Barbara’s Lobero Theatre. They also performed in theaters such as the Assistance League Playhouse, the Philharmonic Auditorium (1950), and the Sartu Theater in Hollywood (1954), as well as going on tour. The company was said to be a “multiracial endeavor,” including three Latina dancers and a white dancer. Dancers with the company included Theodore Crum, Bernice Harrison, Graham Johnson, James Truitte (also danced with Lester Horton Dance Theater), Donald Stinson, Yvonne Miller, Gene Hill Sagan, Ardie Allison, Shirley Vargas, and Diane Gordon (the company’s one white dancer).

Rickard and choreographer Edward Flemyng combined their companies, The First Negro Classic Ballet and Flemyng’s New York Negro Ballet, in 1956. Using original company members, Rickard’s choreography, and Wilson’s music, the new company performed on tour in the UK. The company folded when their main sponsor died, and the First Negro Classic Ballet disbanded in 1959. Company dancers went on to perform in films such as Finian’s Rainbow, An American in Paris, Showboat, and Carmen Jones.

A minstrel-themed ballet, choreographed for Balanchine’s Ballet Society (which later would become The New York City Ballet), was performed by students from the School of American Ballet.

Talley Beatty (1920-1995), born in Shreveport, Louisiana, studied with Katherine Dunham as a child and was an original member of the Dunham Company for several years. He performed in the Broadway show Cabin in the Sky (1940) and in the films Carnival of Rhythm (1940) and Stormy Weather (1943). He also performed in Showboat (1946) and Inside USA (1948). Beatty studied at the School of American Ballet and performed Blackface (1947) with Ballet Society, an early Balanchine company. In the late 1940s and early 1950s, he taught at the Dunham School. During that period he also started the first of several dance companies. Beatty was one of the most notable African American choreographers. Among his many ballets are Road to Phoebe Snow (1959), Congo Tango Palace (1960), Caravanserai (1971), and The Stack Up (1983); he also choreographed for Broadway shows: a revival of House of Flowers (1968), Don’t Bother Me I Can’t Cope (1970), and Your Arms too Short to Box with God.

Betty Nichols was one of the first Black students at the School of American Ballet, and in 1946 she became one of the members of Balanchine’s Ballet Society, later touring with him in Europe. In addition to Blackface, she was also featured in Todd Bolender’s Zodiac.

In a 2013 interview, she said, “I started at the School of American Ballet, probably in 1943. I was the first black in the school. I knocked on the door and presented myself. I thought there was considerable surprise, but the door was opened, and that was it.”

Jan 3: Proceedings of US Congress are televised for the first time.
Mar 12: The Truman Doctrine is announced to Congress by President Harry S. Truman.
Apr 30: The Boulder Dam is renamed in honor of Herbert Hoover.
Jun 5: Secretary of State George Marshall outlines the Marshall Plan.
Jun 11: Sugar rationing ends in US.
Oct 5: Harry Truman makes the first televised presidential address.

Drafting of the Universal Declaration of Human Rights begins in early 1947.
Oct 23: NAACP petition on racism “An Appeal to the World” is presented to the UN.
Dec 25: Taiwan passes human rights laws.