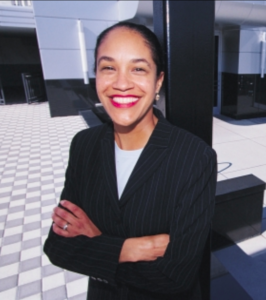 Adelaide Mallette Vienneau (Adelaide Mallette) was born and raised in Nashville, Tennessee. She studied for 12 years with Albertine Maxwell and danced with the Nashville Ballet during high school. In a 1977 article, Vienneau was described as “a smiling slender sprite with elegance in her leaps and delicacy in her control.” After graduation, Vienneau went to New York City to study at the School of American Ballet. A highlight of her time there was being coached by Alexandra Danilova and George Balanchine for the revival of Balanchine’s The Flood to be performed at the 1981 Stravinsky Festival. After three years at the School of American Ballet, Vienneau joined Dance Theatre of Harlem in 1983. With the company, Vienneau toured regionally and nationally, including throughout Europe and South America. She performed in a range of ballets including The Four Temperments, Square Dance, The Firebird, and Creole Giselle—for which she was part of the premiere cast in London, England. Vienneau was also featured with the Dance Theatre of Harlem on CBS’s 60 Minutes and at the 1984 closing ceremonies of the Olympic Games in Los Angeles.

In 1988, Vienneau retired from the stage to start a family and continue her education. She attended Vanderbilt University, majoring in Human and Organizational Development. From 1992 to 1999, she worked for the YWCA of Nashville and Middle Tennessee. In 2001, Vienneau returned to the arts when she became community relations manager for Nashville’s Frist Center for the Visual Arts. In this role, she helped to ensure that the center’s exhibitions and programs were accessible, affordable, educational, and fun for people of all ages. Vienneau later became the Director of the Family Resource Center at Monroe Carell Jr. Children’s Hospital at Vanderbilt University.