Merce Cunningham and John Cage embarked on an extended trip to Europe in the summer of 1949. During their trip, they received an invitation to give a concert at Jean Hélion‘s studio in Paris. After receiving this invitation, Merce Cunningham asked Tanaquil LeClerq and Betty Nichols—members of Balanchine’s Ballet Society vacationing in Paris—to work with him. The two dancers danced in Cunningham’s Effusions avant l’heure, a highly publicized concert with an audience that included Alice B. Toklas and Alberto Giacometti.

Merce Cunningham, considered the most influential choreographer of the 20th century, was a many-sided artist. He was a dance-maker, a fierce collaborator, a chance taker, a boundless innovator, a film producer, and a teacher. During his 70 years of creative practice, Cunningham’s exploration forever changed the landscape of dance, music, and contemporary art. 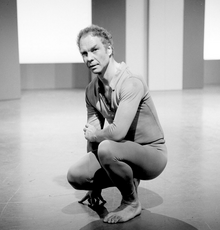 Cunningham started his own dance company in 1953 and created hundreds of unique choreographic works. Defined by precision and complexity, Cunningham’s dances combined intense physicality with intellectual rigor. He challenged traditional ideas of dance, such as the roles of the dancers and the audience, the limitations of the stage, and the relationships between movement and beauty. Cunningham’s embrace of an expanded possibility of dance, music, and visual arts reads like a how-to for pushing the boundaries of culture for subsequent generations.

In the 1940s, Merce Cunningham and his life partner, composer John Cage, developed a radical new concept: music and dance could exist independently within the same performance. The dancers’ movements would no longer be tied to the rhythms, mood, and structure of music. Instead, all forms of art could stand alone, simply sharing a common space and time. This idea would become a cornerstone of Cunningham’s artistic practice and frame his collaborations with a range of visual artists, composers, filmmakers, dancers, and designers, whom he brought together in this generous spirit and encouraged to experiment and create.

In the 1970s and 80s, Cunningham became interested in creating dance works specifically to be filmed by a camera. Along with filmmakers Charles Atlas and Elliot Caplan, he developed imaginative new ways to capture and present the medium of dance through moving images. At the core of this strategy was the repositioning of the camera as the key part of the choreography, rather than a mere witness to the action. Through video, Cunningham could change perspective, move the camera through the studio, focus on unusual details, adjust scale and tempo, interweave scenes, and surround the viewing audience with movement. Utilizing unusual editing techniques and image manipulation, Cunningham and his collaborators invented a new genre of dance expression, continually pushing its practice in unexpected directions.