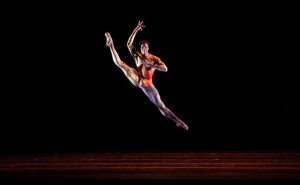 Jermel Johnson began his dance education at the Baltimore School for the Arts. His first four years were spent in their after-school program and his next three enrolled as a student in their rigorous and physically-demanding dance department. Johnson then continued his training at the School of American Ballet (SAB), where he not only received a scholarship to attend their 2001 summer program but also spent an additional year studying under such renowned choreographers as Peter Martins, Peter Boal, Jock Soto, and Andrei Kramarevsky. During his student years, Johnson was often called upon to perform at both schools, including several productions with the Baltimore School for the Arts and in George Balanchine’s The Nutcracker® with SAB.

Johnson came to Pennsylvania Ballet in September 2003 as a member of PBII. He was invited to join the company as an apprentice in 2004 and promoted to corps de ballet for the 2007/2008 season. In 2009, Johnson was promoted to soloist and then to principal dancer for the 2012/2013 season. As a principal dancer, Johnson has performed a variety of roles, including Robert Weiss’ Messiah, Christopher Wheeldon’s  Swan Lake (Prince Siegfried), Jerome Robbins’ Afternoon of a Faun, and George Balanchine’s The Nutcracker® (Cavalier). His featured roles include such works as William Forsythe’s The Vertiginous Thrill of Exactitude, Matthew Neenan’s Keep, Jerome Robbins’ N.Y. Export: Opus Jazz (Statics), and Jiří Kylián’s Petite Mort.

During the 2007/2008 season, Johnson received audience and critical acclaim alike, not only for his standout performances at City Center in New York that November but also in Philadelphia later that spring while performing the world premiere of Matthew Neenan’s Pampeana No. 2. In October 2008, Johnson received a prestigious ballet fellowship from the Princess Grace Foundation – USA, which supported his salary for the season and will support his choreographic endeavors in the future.