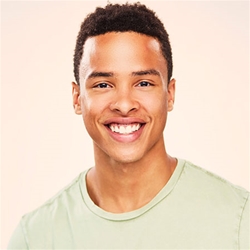 Born and raised in New York City, Charles Cooper began his dance training at the School of American Ballet and at Fiorello H. LaGuardia School of Music & Art and Performing Arts. He continued his training with the Manhattan Youth Ballet (MYB) at the Manhattan Movement & Arts Center (MMAC). With MYB, he performed Balanchine’s “Man I Love” pas de deux from Who Cares and the principal pas de deux and the variation from La Source, as well as the grand pas de deux and the Cavalier variation from Nutcracker. Cooper placed sixth at the Youth America Grand Prix for a group piece choreographed by David Parsons. He studied at the Jacqueline Kennedy Onassis School at American Ballet Theatre on full scholarship and trained for two years at the San Francisco Ballet School, also on full scholarship. With Ballet Memphis, he has danced in The Nutcracker, Reggie Wilson’s I Am A Man, and Steven McMahon’s Flyway and Peter Pan.

Cooper is now a member of Brooklyn Ballet.