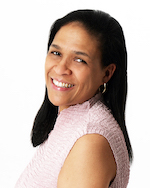 Joselli Audain Deans trained for eight years at the Dance Theatre of Harlem School in New York City and joined the company at the age of 18. During her 11-year career with Dance Theatre of Harlem, she toured with the company to 22 countries on five continents and performed in eight New York seasons, the 1984 Olympics closing ceremonies, and the company’s 1985 Metropolitan Opera engagement. Deans has worked with several great choreographers and dance masters including Valerie Bettis, Agnes de Mille, Frederic Franklin, David Gordon, Geoffrey Holder, Louis Johnson, Arthur Mitchell, Irina Nijinska, Terri Orr, and Billy Wilson. As a performer, Deans was featured in the video Dance Theatre of Harlem: Fall River Legend.

After retiring from her career, Deans earned a B.A. in Theology from the Franciscan University in Steubenville, Ohio. She furthered her studies, receiving Master’s and Doctoral degrees in Dance Education at Temple University in Philadelphia, where Deans was awarded a Future Faculty Fellowship and subsequently, the Temple University Alumni Fellow Award in 2008.

Deans has taught many aspects of dance in higher education at Bryn Mawr College, Eastern University, Xavier University of Louisiana, and Temple University. She has taught ballet in numerous venues, including Freedom Theatre and Philadanco in Philadelphia, where she presently resides with her daughter.