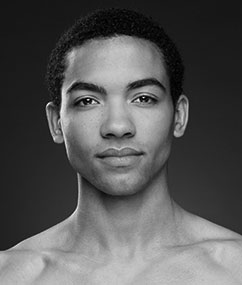 Silas Farley is a member of New York City Ballet’s corps de ballet. He started ballet, jazz, and tap training with Sal and Barbara Messina in Charlotte, North Carolina when he was seven years old. At the age of nine, he was accepted into the boys’ scholarship class of North Carolina Dance Theatre School of Dance, where his teachers were NYCB alumni Patricia McBride, Kathryn Moriarty, and Mark Diamond. At the age of 14, Mr. Farley attended the summer course at the School of American Ballet (SAB), the official school of NYCB, and was then invited to enroll as a full-time student. A choreographer since age 11, Mr. Farley created ballets to music by Gustav Holst for SAB’s 2010 and 2011 Student Choreography Workshops, a work for the 2012 summer session of the New York Choreographic Institute, and a pièce d’occasion for the SAB 2013 Winter Ball. In 2012 he was one of two advanced SAB students selected by Peter Martins for a student teaching pilot program at SAB. In August 2012, Mr. Farley became an apprentice with NYCB and joined the company as a member of the corps de ballet in August 2013.