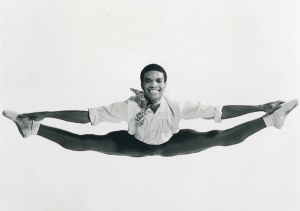 Kabby Mitchell III was a choreographer, educator, and performer whose signature choreography has been seen in Black Nativity since 2000. He danced with Dance Theatre of Harlem, Nederlands Dans Theater, Civic Light Opera, and Oakland Ballet. He was the first African American male soloist to dance with Pacific Northwest Ballet. He was also a professor of Performing Arts and African American Studies at Evergreen State College and was celebrated with a 2016 Mayor’s Arts Award. A mentor to thousands, he recently founded the Tacoma Urban Performing Arts Center (T.U.P.A.C.) to further the arts education for the youth of Tacoma.

He frequently contributed his time to help programs that support the development of young urban dancers and was a supporter of local art and theater companies whose goals are to serve the underserved community through the arts. In 2007, as part of PNB’s first Celebrate Seattle Festival, Mitchell was honored for his significant contributions to the Northwest dance scene and for being the first African American to dance with PNB. Also in 2007, he was featured on the cover of Colors NW magazine’s August issue, and Arthur Mitchell, the director of Dance Theatre of Harlem, asked him to be a part of the “Masters and Mentors” program. DASS Dance also honored Mr. Mitchell for his contributions to contemporary dance in the Northwest. Most recently, Mr. Mitchell directed and/or choreographed Ballet Bellevue’s Nutcracker, Seattle Opera’s Porgy and Bess, and Langston Hughes’ summer musical entitled Roll of Thunder: Hear My Cry.