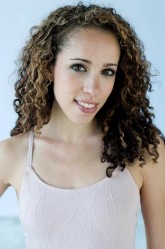 Jordana Daumec was born in New York City, New York and trained at Studio Maestro and Canada’s National Ballet School. She joined The National Ballet of Canada as a RBC apprentice in 2003 and was promoted to first soloist in 2015.

Recently, Ms. Daumec performed the role of Young Shepherdess in The Winter’s Tale and The Lamplighter in the world premiere of Le Petit Prince. Her repertoire also includes Lescaut’s Mistress in Manon, Princess Florine in The Sleeping Beauty, Italian Princess in Swan Lake, Bronislava in Nijinsky, Blossom and Moss in Cinderella, Bee in The Nutcracker, and the Female Lead in Symphony #9. She has also danced roles in Onegin, Giselle, Romeo and Juliet, Alice’s Adventures in Wonderland, Don Quixote, La Sylphide, Madame Butterfly, The Taming of the Shrew, An Italian Straw Hat, The Seagull, Theme and Variations, Symphony in C, Jewels, The Four Temperaments, The Four Seasons, the second detail, Allegro Brillante, Glass Pieces, Russian Seasons, Emergence, and Cacti.

The Sleeping Beauty
“Jordana Daumec delivered a knockout performance as Princess Florine.” National Post, 2015
Manon
“Jordana Daumec as Lescaut’s Mistress… is pure sauce; ever the vixen.” Fiord Review, 2014
The Nutcracker
“Jordana Daumec puts some real buzz into the role of a bee.” Toronto Star, 2011
The Winter’s Tale
“Daumec’s role as the Young Shepherdess is showing off technique in the peasant dances. She has always been one of the company’s superb technicians and she demonstrates her skills wonderfully well in the Bohemia scene.” PaulaCitron.ca, 2015