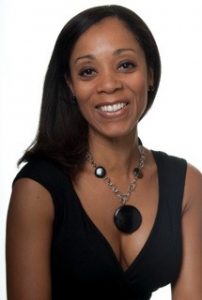 Kareen Pauld Camargo was born in Haiti and came to the United States at the age of two. She grew up in New York, where she trained at the American Ballet Theatre School, The School of American Ballet, The High School of Performing Arts, and The Dance Theatre of Harlem School and Workshop Ensemble. She performed with The Dance Theatre of Harlem Company for several years, dancing works by Arthur Mitchell, Balanchine, Bronislava Nijinska, Agnes de Mille, Geoffrey Holder, and many others. She moved to South Florida to join The Miami City Ballet in 1990. She had the privilege of dancing soloist and principal roles in many of George Balanchine’s masterpieces including The Nutcracker, Raymonda Variations, Scotch Symphony, Valse-Fantasie, and Agon. She was a featured dancer in other works such as Paul Taylor’s Three Epitaphs, Esplanade, and Company B. Since retiring from the ballet stage in 1998, Ms. Camargo has taught ballet at The Miami City Ballet School. She was rehearsal and ballet mistress for the children in Miami City Ballet’s production of George Balanchine’s Nutcracker in 2005. Ms. Camargo has staged and rehearsed The Thomas Armour Youth Ballet’s version of The Nutcracker since 2008. Ms. Camargo returned to the stage when she joined Miami Contemporary Dance Company in 2005 and later on became company manager in 2009. Ms. Camargo joined The New World School of The Arts adjunct faculty in 2009, where she currently teaches ballet in the High School Musical Theater Department and College Dance Department. In 2011 she joined the staff of The Thomas Armour Youth Ballet, where she served the community of Miami Gardens, Florida as outreach coordinator and ballet instructor until 2013. In 2011 and 2012, Ms. Camargo directed and taught at Dance Theatre of Harlem Summer Intensive in Detroit, Michigan. She has taught summer intensives for Tallahassee Ballet and DTH New York and Texas. Additionally, she teaches The Alvin Ailey company class when they are in the Miami area.