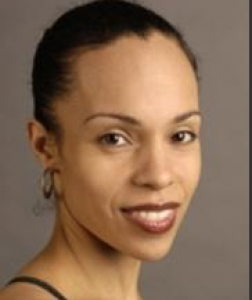 Tai Jimenez, a native of New York City, began her dance training with Joan Millen Mesh and went on to study at the School of American Ballet, the Alvin Ailey American Dance Center, and LaGuardia High School with Madame Gabriella Darvash and Ken Ludden. She was a member of the Dance Theatre of Harlem School Ensemble before joining DTH, where she became a principal dancer. Her repertory included the title roles in Giselle and Firebird as well as numerous works by George Balanchine, Glen Tetley, Sir Kenneth MacMillan, Sir Frederick Ashton, Bronislava Nijinska, August Bournonville, Agnes de Mille, Alvin Ailey, Alonzo King, Robert Garland, John Alleyne, Lar Lubovitch, Doug Varone, Dwight Rhoden, and others. Later, Ms. Jimenez joined Boston Ballet as a principal. There she originated a role in Mark Morris’ Up and Down and was also seen in Val Caniparoli’s Lambarena, Jorma Elo’s Carmen, Balanchine’s Serenade and A Midsummer Night’s Dream, Nijinska’s Les Noces, Cranko’s Romeo and Juliet, and Asaf Messerer’s Spring Waters. She has appeared as a guest artist with the New York City Ballet and companies across the United States. She made her Broadway debut as Ivy Smith (Miss Turnstiles) in the 1998 revival of On the Town, directed by George C. Wolfe. Ms. Jimenez originated the roles of Fran in Maria Irene Fornes’ Letters from Cuba and Ysabel in Debbie Allen’s Soul Possessed. She was a featured dancer at the Academy Awards, the Kennedy Center Honors, and in pop superstar Prince’s Rave Unto the Year 2000. Ms. Jimenez played the role of Mela in the film One Last Dance starring Patrick Swayze. The versatile Jimenez is also a teacher and choreographer. She was a choreographic assistant in the feature film The Game Plan, starring Dwayne “The Rock” Johnson. She has taught at Harvard University, Phillips Academy in Andover, The Boston Conservatory, Boston Arts Academy, East Street Dance, Jeannette Neill’s, Boston Ballet Summer Intensive, Dance Theatre of Harlem School, and ModasDance Summer Intensive. She has been featured on the cover of Pointe Magazine and in Dance Teacher Magazine, and her writing has appeared in both Pointe and Dance Magazine.

Where Are All the Black Swans?, The New York Times
Tai Jimenez has been hired as a Principle [sic] Dancer by the Boston Ballet, Getty Images
A Boston Ballet dancer’s eclectic career, Boston.com
Tai Jiminez, Black Past