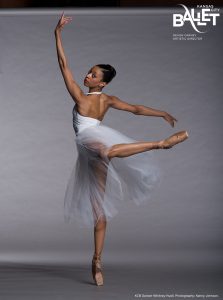 Whitney Huell trained at the South Carolina Governor’s School for the Arts and Humanities under the tutelage of Stanislav Issaev and Robert Barnett. She then attended Indiana University, earning a B.S. in Ballet and Psychology before joining Ballet West. With Ballet West, Huell performed featured roles in Paquita, Sleeping Beauty, Cinderella, Petite Mort, and Jewels. In January 2011 she was one of Dance Magazine’s Top 25 to Watch and was also featured in the September 2012 issue of Pointe Magazine. With Kansas City Ballet, Huell has performed works by Amy Seiwert, Monique Meunier, Stanton Welch, Edwaard Liang, Val Caniparoli, and Jerome Robbins and has been featured as The Lead Woman in James Kudelka’s The Man in Black, Caterpillar in Alice (in wonderland), Third Theme in The Four Temperaments, and Jeté Woman in Forsythe’s In the Middle Somewhat Elevated. In 2018 she was featured as the Sugar Plum Fairy in Devon Carney’s production of The Nutcracker, becoming the first African American in KCB history to perform the role.

KC Ballet features first African-American ballerina in lead role for The Nutcracker, KSHB Kansas City
‘Isn’t it something?’ A rarity in ballet, this KC ‘Nutcracker’ Snow Queen is black, The Kansas City Star