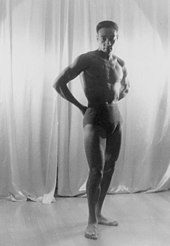 Al Bledger was a lead dancer of the Eugene Von Grona’s American Negro Ballet Company. Bledger received positive press after the company’s debut in 1937. He performed as a part of Von Grona’s Negro Swing Ballet Dancers in Lew Leslie’s Blackbirds of 1939 and the original Broadway casts of Carmen Jones (1943) and Swingin’ the Dream (1939).