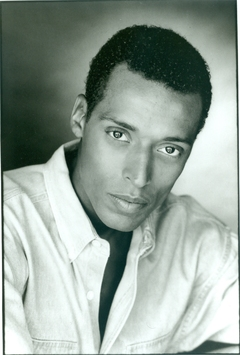 Cubie Edwin Burke, born November 8, 1964, was raised in Inglewood, New Jersey and began performing with his family’s music group “The Five Stairsteps and Cubie” as early as sixteen months old. The group, in which Cubie played the drums and danced, recorded and released hits from 1968 to 1969.
Burke focused his artistic talents on dance and joined the Dance Theatre of Harlem at age 17. Burke appeared in DTH’s premiere of Jerome Robbins’ Fancy Free (1985). After working with the company for six years, he later joined Atlanta Ballet, where he was the company’s only African American leading man at the time and was in the original cast of Toni Pimble’s Common Ground (1992). Burke was a member of Alvin Ailey American Dance Theater and performed at both the Barcelona and Los Angeles Olympics closing ceremonies. In addition to dancing with Las Vegas theatrical shows and with Prince, he appeared in Clairol commercials. His choreography work includes the 1997 Soul Train Music Awards.
Burke appeared as an actor in the ninth season of Unsolved Mysteries in addition to beginning a production company in 1997.
Burke also composed music and recognized Clyde Otis and Stevie Wonder as his mentors. He recorded a single “Down for Double” in 1982, but never finished an album or recorded many of the songs he had written.
It is believed that Burke received a brain injury that resulted in his death at age 49, on May 14, 2014 in Smyrna, Georgia.