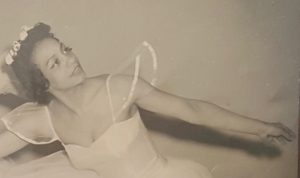 Frances Jimenez, born in Philadelphia, trained with Marion Cuyjet and Antony Tudor at the Philadelphia Ballet Guild as well as at the Judimar School of Dance in the early 1950s. She later danced with the New York Negro Ballet. The company disbanded while on tour in Europe, and Jimenez remained to continue her dance career, appearing on television and in films. Upon her return to the states, Jimenez worked in retail and earned her associate’s degree in drug and alcohol abuse.