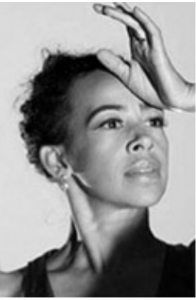 Chandra Moss-Thorne began her dance training at the School of Cleveland Ballet under the direction of Daniel Job and Nicole Sowinska. Moss-Thorne attended Butler University, graduating with a BA with honors in Dance Pedagogy. Moss-Thorne was a company member with the Dance Theatre of Harlem and The Cincinnati Ballet. As a professional ballet dancer, Moss-Thorne delighted audiences in many leading roles including Beauty in David Nixon’s Beauty and the Beast, the Lead Pas de deux in Nils Christie’s Sync, Principal in Butler’s Carmina Burana, Choleric in Balanchine’s Four Temperaments, Fairy Godmother in Morgan’s Cinderella, and Lead Mazurka in Franklin’s Coppelia. Her repertoire also includes works by choreographers Stanton Welch, Val Caniparoli, Kirk Peterson, Arthur Mitchell, Robert Garland, and Geoffrey Holder. Moss-Thorne had the privilege of working with numerous repetiteurs from the Balanchine Trust including Bart Cook, Victoria Simon, Elyse Borne, Susan Hendl, and Suzanne Farrell. Moss-Thorne has performed with the Washington and Cincinnati Operas. Most recently, she performed in Philadelphia at Temple University and The Performance Garage.

As a teacher, she has been on faculty at Goucher College, Towson University, Bryn Mawr College, Cincinnati Ballet Academy, and as a guest teacher at numerous schools around the country. Moss-Thorne was the coordinator for CincyDance!, the outreach program of the Cincinnati Ballet Academy, developing programming and teaching classes. Currently she is a visiting artist at Stockton University and a lecturer in dance at Swarthmore College.

Moss-Thorne is a certified Pilates instructor through Power Pilates. She lives in Philadelphia with her husband and three children.