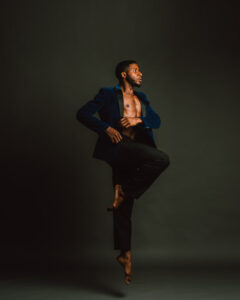 Joshua LaMar was born and raised in Los Angeles, CA. He began his formal dance education at the age of eight, training in tap, modern, ballet, jazz, hip hop, salsa, contemporary, and African dance. After graduating from the Charter High School of the Arts, he moved to Philadelphia to study at the University of the Arts. A year later, LaMar relocated to New York City to attend the Dance Theatre of Harlem Professional Training Program.

In 2014, LaMar started his professional career as an original company member of Collage Dance Collective while still training at DTH. He later moved to Memphis, Tennessee. After leaving Collage Dance Collective in 2016, LaMar danced with Deeply Rooted Dance Theatre of Chicago. LaMar has also held a range of other professional positions such as featured artist with Holland America Cruise Line; Male Soloist in An American In Paris in Ogunquit, ME; and Indio in West Side Story at the Lyric Opera of Chicago. His television appearances include Interface/Atlanta Film Studios’ Save The Planet, the PAC-10 Halftime Show, and the Tonight Show with Jay Leno. LaMar is also a participant in the ballroom dance scene and is a member of The Impeccable Haus of Riccardo Tisci. His ballroom work as Dro Tisci was featured on Season 2 of HBO’s Legendary. Over his career, LaMar has worked with a broad range of directors and choreographers including Debbie Allen, Camille A. Brown, Robert Garland, Francesca Harper, Judith Jamison, Virginia Johnson, Alonzo King, Arthur Mitchell, Darrell Grand Moultrie, Nicole Clarke Springer, and Chester Whitmore.