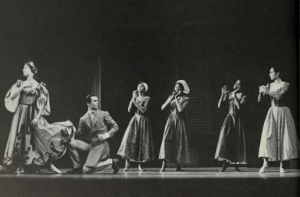 For the 25th anniversary of American Ballet Theatre in 1964-1965, Agnes de Mille choreographed The Four Marys, a piece by Trude Rittman based loosely on The Ballad of Mary Hamilton, a 16th century Scottish song about an attendant to Mary Stuart, Queen of Scots. De Mille transports the story to the ante-bellum South, placing emphasis on a relationship between a white suitor and a Black maid rather than a king and a lady-in-waiting.

The ballet itself begins with a young woman (Judith Lerner), her suitor (Paul Sutherland), and her four maids, Mary Seaton (Judith Jamison), Mary Beaton (Cleo Quitman), Mary Carmichael (Glory van Scott), and Mary Hamilton (Carmen de Lavallade). The young woman’s suitor falls in love with Mary Hamilton, the most beautiful of the Young Woman’s maids, and their affair produces a child. After the child is born, Hamilton drowns it and is hanged for murder, and the suitor faces no consequence. The first-person narration of the tragic ballad was sung by Louise Parker, who, along with Lavallade and Sutherland, received praise from critics.

The show had about six performances at the New York State Theater, sandwiched between George Balanchine’s Grand Pas-Glazounov led by Lupe Serrano and Scott Douglas and Antony Tudor’s Jardin aux Lilas, and then spent additional time at the Chicago Opera House.