Joseph Rickard and Edward Flemyng combined their companies, The First Negro Classic Ballet and Flemyng’s New York Negro Ballet, in 1956. With the original company members, Rickard’s choreography, and Wilson’s music, the new company performed on tour in the United Kingdom and became the “unofficial American ambassador of African American ballet abroad.” The company’s performances came to a halt when their main sponsor died in 1959. Company dancers went on to perform in films such as Finian’s Rainbow, An American in Paris, Showboat, and Carmen Jones. 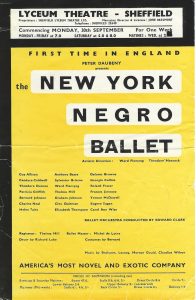