Louis Johnson and Bernard Johnson performed together as replacement ensemble members in Hallelujah, Baby!, which earned the Tony Award for Best Musical in 1968. By this time, Louis Johnson had been performing on Broadway for over a decade and had been a part of the premiere of Jerome Robbins’ Ballade; Bernard Johnson had previously performed in On a Clear Day You Can See Forever and with the New York Negro Ballet. The two dancers would have crossed paths in the past, as Louis Johnson choreographed Folk Impressions for New York Negro Ballet. 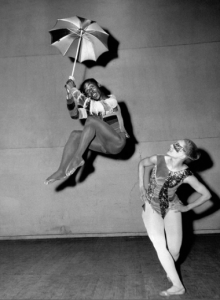 Bernard Johnson was born in Detroit where he began his ballet training and professional career. As a member of the New York Negro Ballet, Mr. Johnson was not only a dancer but also a costume designer. Johnson and his former wife Cleo Quitman, also a member of the New York Negro Ballet, toured the continent performing a blues and African act that they put together. He also appeared in Aubrey Hitchins’ Negro Dance Theater in 1956. Johnson also spent time on Broadway, at the Apollo, at City Center, and in other productions as a dancer, co-director, choreographer, and costume designer. Some of these productions include On a Clear Day You Can See Forever, Fiorella, Showboat, and Ain’t Suppose to Die a Natural Death. Mr. Johnson became known as a fashion designer in the early 1970s, followed by a busy career as a costume designer for theatre, dance, and film. Mr. Johnson designed costumes for the New York City Ballet, Dance Theatre of Harlem, the Joffrey Ballet, Ballet Hispanico, and several small modern dance companies. His films included the 1990-91 New Jack City, and his television credits included costumes for The Merv Griffin Show and specials for Bill Cosby, Harry Belafonte, and Lena Horne. He created stage wardrobes for Gregory Hines, Savion Glover, the Isley Brothers, Ashford and Simpson, and many rock and jazz musicians, as well as for shows by Judy Garland and Josephine Baker. Mr. Johnson was a member of the Black Film Makers Hall of Fame.