Negro Dance Theater (NDT) was founded by an Englishman from Cheltenham, Aubrey Hitchins (1906-1969), in New York City in 1954. This all-male group performed ballet, modern, and what Hitchins called “primitive dance.” 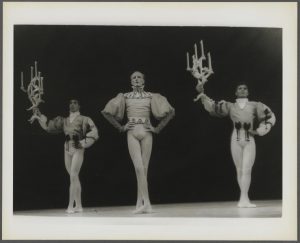 Antony Tudor’s Offenbach in the Underworld was first performed at the Philadelphia Convention Hall on May 8, 1954.

Jacques Offenbach’s original operetta premiered in 1858. While Offenbach’s piece was based on Greek mythology, Antony Tudor’s ballet is a “humorous story about the flirtatious interactions among celebrities at a 1870s French cafe, [and] is filled with colorful characters and costumes. It culminates with a sultry and exhilarating chorus line of high kicking known as the ‘can-can.’” The ballet has been performed by American Ballet Theatre, Joffrey Ballet, Ballet West, and National Ballet of Canada.

Both John Jones and Billy Wilson were members of Offenbach in the Underworld’s original 1954 cast. Delores Browne also performed in the ballet in 1954.

May 24: German airline Lufthansa forms.
Jul 12: ANC President Albert Luthuli banned by South African Minister of Justice from attending public gatherings and confined to the magisterial district of Lower Tugela, Natal.
Aug 1: In South Africa, the Natives Resettlement Act empowers the government to remove Africans from any area within and next to the magisterial district of Johannesburg; less than a year after the Act is passed, Sophiatown residents are forcefully removed to Meadowlands in Soweto.
Oct 1: British colony of Nigeria becomes a federation.
Dec 10: Albert Schweitzer receives Nobel Peace Prize.