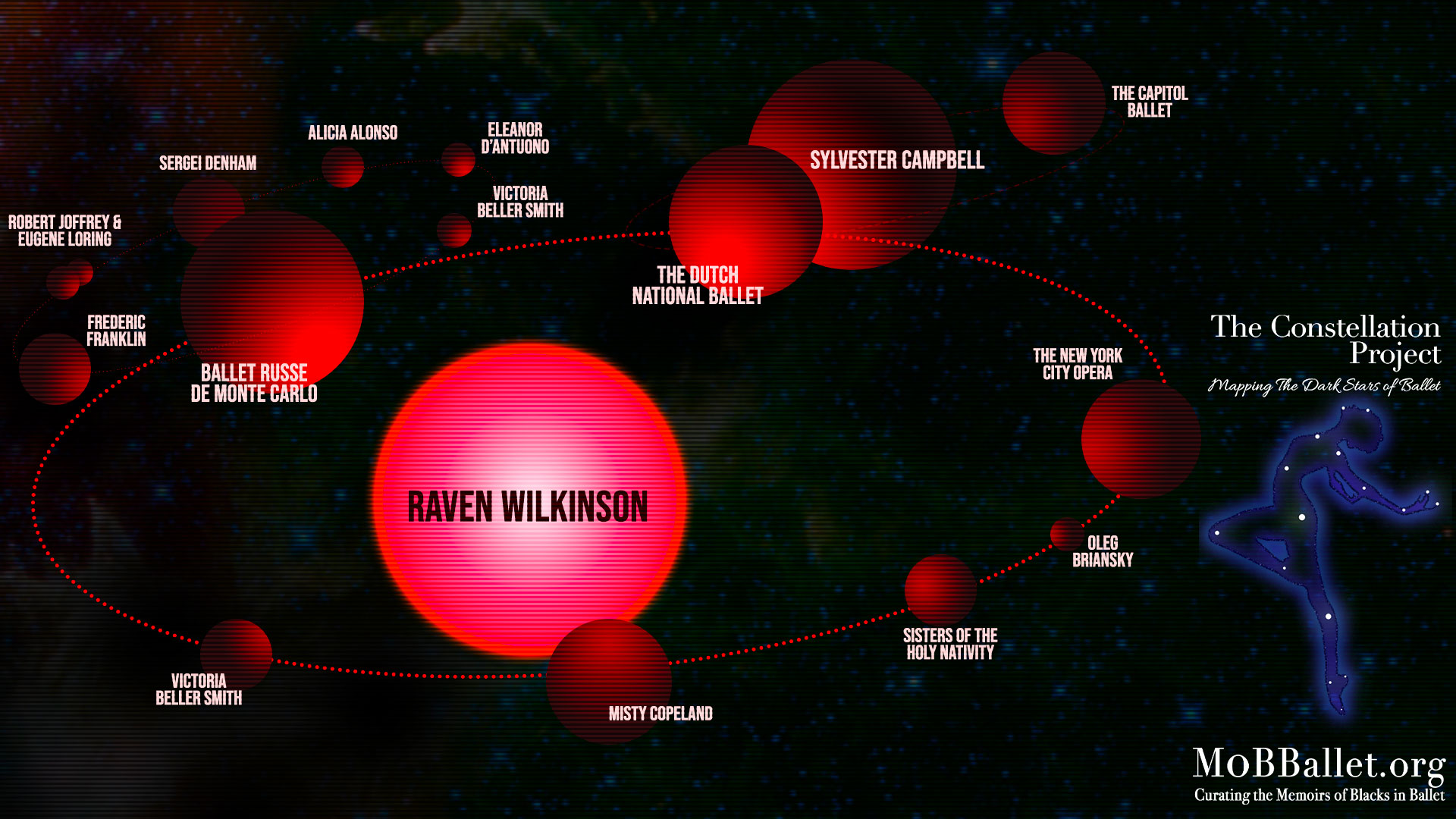 “These new orbits speak to the existing six as artists and institutions by creating an intricate web of interconnectivity and illuminating the shadow history of Blacks in Ballet,” said Howard. “These new orbits draw a more detailed picture of two ballet pioneers, they help us understand the impact of white allyship to creating ballet spaces for Black artists, and highlight two long forgotten projects presented by a major company that featured Black ballet dancers. Our growing universe fulfills our mission of making the invisible visible, and uplifting the stories of these artists and honoring their humanity.”

About the new orbits:

Ballet pioneer Raven Wilkinson was a member of the Ballet Russe de Monte Carlo in 1955. As a light-skinned Black woman, she was able to pass as white on stage, although she never disavowed her race in everyday life. Wilkinson’s orbit maps her early training with Maria and Vecheslev Swoboda, the Ballet Russe de Monte Carlo director, Sergei Denham, fellow company member Eleanor D’Antuono, Sylvester Campbell who first suggested she consider joining  the Dutch National Ballet where she was a soloist for seven years, and guest artist. Other intersections include: Alicia Alonso; Frederic Franklin, Robert Joffrey and Eugene Loring, Capitol Ballet; The New York City Opera, and Oleg Briansky.

Thandi Steele of Williams College contributed to this orbit.

Founded in 1939 as Ballet Theatre, the company formed the Negro Unit under the Works Progress Administration Federal Theatre Project, which employed a large number of Black dancers and choreographers. This orbit highlights the 16 dancers in the all-Black unit of the company, and the single work created for them, Agnes de Mille’s Black Ritual or Obeah.

Janet Collins was an acclaimed American ballet dancer and choreographer. At age 15, she auditioned for the Ballet Russe de Monte Carlo but declined an offer when told she would have to disguise the fact that she was Black. Collins’s orbit illustrates her connections to Broadway and modern dance, her teachers, and the Metropolitan Opera Ballet, where she became the first African American prima ballerina. The orbit also explores her relationship with her cousin, Carmen de Lavallade.

Helen Chen of Princeton University contributed to this orbit.

Originally launched in February 2021, The Constellation Project: Mapping the Dark Stars of Ballet places key Black ballet dancers within a digitally rendered galaxy where visitors can explore each star’s “orbit” and learn about the intersections and experiences that shaped the dancer’s career. These four new orbits join the existing obits of Arthur Mitchell, Mel Tomlinson, Lavinia Williams, Mabel Jones Freeman, Doris Jones and Claire Haywood, and the Legacy of Black Philadelphians in Ballet, mapping the points at which the lives and careers of dancers intersected with each other, and other artists, institutions, and white allies contemporary to them.

Dance history is typically taught within a narrative that centers male whiteness and marginalizes the contributions of people of color, setting them apart from the “norm.” The purpose of The Constellation Project is to celebrate and teach the history of Black dance artists with the necessary historical context and perspective, reflecting the legacy of oppression and exclusion that resulted in so few Black dancers reaching their full potential. The Constellation Project also highlights the organic intersections of different artists, choreographers, and organizations that resulted in the cross-pollination of ideas and influence within the ballet community.

About MoBBallet (Memoirs of Blacks in Ballet)

Founded in 2015 by writer and diversity strategist Theresa Ruth Howard, MoBBallet preserves, presents, and promotes the contributions, and stories of Black artists in the field of Ballet, illustrating that they are an integral part of dance history at large. Our mission is to illuminate the lesser-known history and legacies of international professional Black ballet artists that has been muted, or oftentimes eradicated from the larger canon of dance history by being the digital platform that compiles it in one online location. MoBBallet curates and facilitates forums for stimulating and dynamic conversations about race, diversity, equity, inclusion and art. MoBBallet promotes larger discussions within the dance community, as well as provides a platform and network for emerging dancers, educators, teachers, and choreographers. We are only as strong as our stories, therefore they must only be told and preserved.