In 1998, Carlos Acosta left the Houston Ballet to join The Royal Ballet of London as a principal dancer under the direction of Anthony Dowell. He became a principal guest artist with the company in 2003 and is known for his roles as Siegfried (Swan Lake), Albrecht (Giselle), The Prince (The Nutcracker), Des Grieux (Manon), Prince Florimund (The Sleeping Beauty), Basilio (Don Quixote), and Apollo. Though Acosta left the company in 2016, he has created an original work titled Carmen, staged Don Quixote for the company, and returns as a principal guest repetiteur. 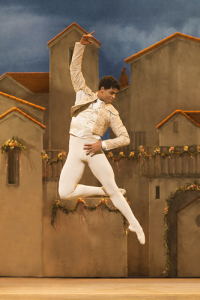 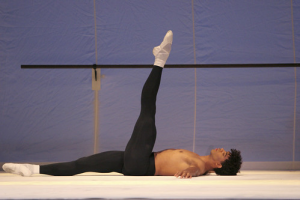 Born in Havana in 1973, Carlos Acosta trained at the National Ballet School of Cuba with many of its most influential teachers, including Ramona de Sáa. From 1989 to 1991, Acosta performed throughout the world, guesting with several companies including the Compagnia Teatro Nuovo di Torino in Italy, where he danced alongside Luciana Savignano. He was invited by Ben Stevenson to dance as principal with the Houston Ballet between 1993 and 1998. There, he made his American stage debut as the Prince in The Nutcracker. Following this, his repertoire with the Houston Ballet included Prince Siegfried in Swan Lake, Solor in La Bayadère, Basilio in Don Quixote, Ben Stevenson’s Britten Pas de Deux, the male lead in Harald Lander’s Etudes, Jiri Kylian’s Symphony in D and the Chosen One in The Rite of Spring.

Rubinald Rofino Pronk joined the Dutch National Ballet at 16 years old after training at the Royal Conservatory of Dance. Pronk danced for the company as a soloist until 2006. 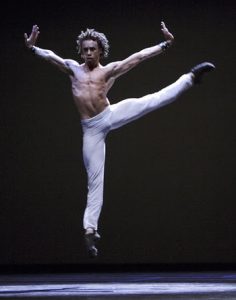 Pronk was born and raised in The Hague, Netherlands. After leaving Dutch National Ballet in 2006, he joined Dwight Rhoden and Desmond Richardson’s Complexions Contemporary Ballet in New York City. He toured with the company extensively and performed works by Dwight Rhoden and Ulysses Dove. In 2008, he co-founded Jacoby & Pronk with Drew Jacoby. Pronk was awarded the Alexandra Radius Prize for the Best Dancer of Holland, and in 2000, he won the Encouragement prize from Dansersfonds ’79. He holds two nominations for the VSCD “Silver Swan” award for best performance of the year.

Misty Copeland wins first place in the prestigious Los Angeles Spotlight awards in 1998 at the age of 15.

Jan 1: All California bars, clubs and card rooms must be smoke-free.
Feb 6: Washington National Airport is renamed Ronald Reagan National Airport.
Feb 26: Oprah Winfrey is found not guilty in beef defamation trial brought by Texas cattlemen.
Oct 8: US House of Representatives votes to begin impeachment hearings against President Bill Clinton on charges of lying about his affair with Monica Lewinsky.
Dec 19: President Bill Clinton is impeached for perjury and obstruction of justice.
Jan 18: Now an annual observance, the New York Stock Exchange closes for the first time in honor of the birthday of Dr. Martin Luther King Jr.

Apr 10: The United Kingdom, Republic of Ireland, and Northern Ireland sign the Good Friday Agreement, also known as the Belfast Agreement.
Jun 1: The European Central Bank is established in Frankfurt Germany.
Jul 5: Japan launches a probe to Mars, joining the United States and Russia as an outer space-exploring nation.

Jan 7:  The new Encarta Africana, containing 3,000 scholarly articles on Black culture and history as part of a 2-CD ROM set by Microsoft, is created. It includes a timeline that combines events in Africa and America.
Jan 18: 55th Golden Globes—Titanic, Peter Fonda, and Judi Dench win.
Jan 28: Michelangelo’s Christ & the Woman of Samaria sells for $7.4 million.
Jan 30: Howard Stern Radio Show premieres in Indianapolis, IN on WNAP 93.1 FM.
Feb 18: Andrea Bocelli makes his operatic debut as Rodolfo in La bohème at the Teatro Comunale in Cagliari.
Feb 22: The King and I closes at Neil Simon Theater NYC after 781 performances.
Mar 2: Data sent from the Galileo spacecraft indicates that Jupiter’s moon Europa has a liquid ocean under a thick crust of ice.
Mar 23: 70th Academy Awards—Titanic, Jack Nicholson, and Helen Hunt win.
Aug 25: The Miseducation of Lauryn Hill, the debut album by Lauryn Hill, is released (5 Grammy Awards including Album of the Year, Billboard Album of the Year 1998).
Sept 7: The search engine Google is founded and incorporated as a private company in Menlo Park, California by Larry Page and Sergey Brin.
Oct 20: Comedian Richard Pryor is awarded the first ever Mark Twain Prize for American Humor.

Jan 15: Civil rights veteran James Farmer is one of 15 men and women awarded the Medal of Freedom from President Clinton. Born in Marshall, Texas, Farmer was the national director of the Congress of Racial Equality during the 1960s and was one of the most influential leaders of the civil rights movement throughout its most turbulent decade.
Feb 21: Julian Bond is elected chairman of the 64-member board of the NAACP.
Apr 23: James Earl Ray dies at a Nashville hospital at age 70. Ray is the ex-convict who confessed to assassinating the Rev. Martin Luther King Jr. in 1968 and then insisted he was framed.
Jul 13: A jury in Poughkeepsie, NY, rules that the Rev. Al Sharpton and two others defamed a former prosecutor by accusing him of raping Tawana Brawley. Steven Pagones won a $345,000 judgment.
Sept 2: United Nations court finds Jean-Paul Akayesu, the former mayor of a small town in Rwanda, guilty of nine counts of genocide, the first time that the law against genocide had been enforced.
Nov: The European Court of Human Rights (ECHR) is established as a permanent fixture.
Nov 9: Britain abolishes the death penalty.