Misty Copeland is promoted to soloist at American Ballet Theatre

Misty Copeland joined the American Ballet Theatre in 2000 and became a member of the corps de ballet in 2001. In 2007, Copeland became the second African American female soloist in the company’s history. 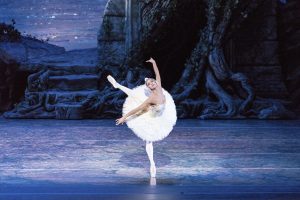 Misty Copeland joined ABT’s Studio Company in September 2000 and joined American Ballet Theatre as a member of the corps de ballet in April 2001. She was appointed to soloist in August 2007 and principal dancer in August 2015. Her roles with the company include Gamzatti, a Shade, and the Lead D’Jampe in La Bayadère; Milkmaid in The Bright Stream; the Autumn Fairy in Frederick Ashton’s Cinderella; Blossom in James Kudelka’s Cinderella; Swanilda and the Mazurka Lady in Coppélia; Gulnare and an Odalisque in Le Corsaire; Mercedes, Queen of the Dryads, the lead gypsy, and a flower girl in Don Quixote; the Masks in Christopher Wheeldon’s VIII; the Firebird in Alexei Ratmansky’s Firebird; Flower Girl in Gaîté Parisienne; Zulma and the peasant pas de deux in Giselle; Queen of Shemakhan in The Golden Cockerel; the Waltz in Les Sylphides; Lescaut’s Mistress in Manon; Clara, Columbine, and one of The Nutcracker’s Sisters in Alexei Ratmansky’s The Nutcracker; Bianca in Othello; a Gypsy in Petrouchka; the Lead Polovtsian Girl in the Polovtsian Dances from Prince Igor; the Saracen Dancer in Raymonda; Cowgirl in Rodeo; Juliet and a Harlot in Romeo and Juliet; Princess Florine in The Sleeping Beauty; and Odette-Odile, the pas de trios, a cygnet, and the Hungarian Princess in Swan Lake.

Jan 4: The 110th United States Congress convenes and elects Nancy Pelosi as the first female Speaker of the House.
Apr 18: The Supreme Court of the United States upholds the Partial-Birth Abortion Ban Act.
Dec 17: Republic of Lakotah asserts independence from the United States.