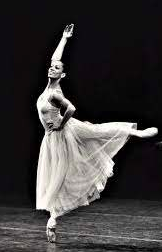 Debra Austin began her journey in ballet when she was eight years old. At the age of 12, she was awarded a scholarship to dance at the School of American Ballet in New York City. At 16, she was handpicked by George Balanchine to join the school’s affiliate company, New York City Ballet. While there, Austin danced many principal roles by both George Balanchine and Jerome Robbins, one of which was filmed for a PBS television special, Live From Lincoln Center. In 1980, she left NYCB to dance with Ballett Zürich, where she danced principal roles (many with Rudolf Nureyev) in works by all of the major choreographers, including Myrtha in Heinz Spoerli’s Giselle. While there, she toured throughout Europe.

May 28: Boston Ballet becomes the first American company to perform in China with a three-week tour to Beijing, Shanghai, and Guangzhou (Canton).
Apr 29: New York City Ballet donates the proceeds from their benefit performance to assist in the purchase of protective vests for New York City police officers.
Sept: Baryshnikov returns to the American Ballet Theatre as an artistic director.

May: The first African American female graduates from the Naval Academy.
May 17: Races riots kill 16 and injure 300 in Miami, FL.
May 21: Jean Marie Butler graduates from the Air Force Academy as the first woman to graduate from a US service academy.
June 23: The first female state police officer graduates in New Jersey.
Sept 13: The first United Negro College Fund telethon airs.
Oct 14: Presidential nominee, Ronald Reagan, promises to put a woman in the US Supreme Court.
Dec 2: Willie Lewis Brown Jr. becomes the first African American elected as the Speaker of the California State Assembly.

Jan 8: NCAA decides to sponsor championships in five women’s sports.
Feb 3: President Carter sends Muhammad Ali on a tour in Africa as his envoy.
Feb 14: The 13th Winter Olympics begin in Lake Placid, NY.
Feb 29: Gordie Howe sets record for goals in NHL at 800.
Jun 26: Mary Decker is the first woman to break the 4.5 minute mile.
Oct 21: The first and only time the Philadelphia Phillies won the World Series in their 98 year history.