Debra Austin is hired as a principal with Pennsylvania Ballet

In 1982, Austin was hired by Robert Weiss, the artistic director of the Pennsylvania Ballet, to be a principal dancer for the company. This made her the first African American female to be hired as a principal dancer of a major ballet company. 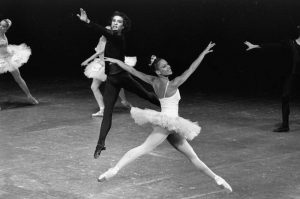 Austin was also the first African American female dancer at New York City Ballet. Austin received a scholarship to the School of American Ballet when she was 12. At 16, she was handpicked by George Balanchine to join the school’s affiliate company, NYCB. While there, Debra danced many principal roles by both George Balanchine and Jerome Robbins, one of which was filmed for a PBS television special, Live From Lincoln Center. She later joined the Zurich Ballet in Switzerland, where she danced principal roles in works by many major choreographers.

She currently serves as ballet mistress for the Carolina Ballet.

Founded in 1982 by Alonzo King, LINES is a contemporary ballet company based in San Francisco with its own permanent home known as the LINES Dance Center. King has been acclaimed as a visionary who draws upon a diverse set of deeply-rooted cultural traditions, altering the way we look at ballet. His work is in the repertories of leading companies around the world, and he is the recipient of many prestigious honors including the 2008 Jacob’s Pillow Dance Award. A list of the company’s work carries the subtitle “The hierarchical migration of birds and mammals,” and its abstract imagery indeed evokes the delicate beauty of winged creatures.

Mar 10: US President Reagan proclaims economic sanctions against Libya.
Jun 15: Supreme Court rules all children, regardless of citizenship, are entitled to a public education.
Jun 24: Equal Rights Amendment goes down to defeat.
Jul 27: Indian Prime Minister Indira Gandhi visits the US for the first time in almost 11 years.
Oct 14: US President Reagan proclaims a war on drugs.

Dec 7: In Texas, Charles Brooks Jr. becomes the first person to be executed by lethal injection in the US.
A national campaign against environmental racism is launched when Reverend Benjamin Chavis (b. 1948) and his congregation block a toxic waste dump in North Carolina.