The Black Crook, a theatrical extravaganza, opened in 1866 and was restaged in 1868. During its very long run, the musical introduced generations of Americans to the art of ballet. Hundreds of dancers were featured in its long run and tour, which lasted until 1909. It was the start of music halls and variety shows. 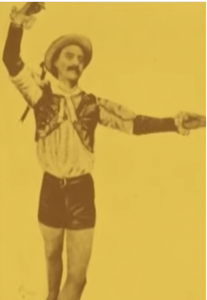 The Black Crook is a work of musical theatre first produced, with great success, in New York in 1866. Many theatre writers have identified The Black Crook as the first popular piece that conforms to the modern notion of a musical, while others regard this conclusion “as something of a joke.” The Black Crook‘s book was written by Charles M. Barras (1826–1873). The music, selected and arranged by Thomas Baker, consists mostly of adaptations, but included some new songs composed for the show, notably “You Naughty, Naughty Men.” The story is a Faustian melodramatic romantic comedy, but the production became famous for its spectacular special effects and skimpy costumes.

The show opened on September 12, 1866 at the 3,200-seat Niblo’s Garden on Broadway in New York City and ran for a record-breaking 474 performances. It then toured extensively for decades and was revived on Broadway in 1870–71, 1871–72, and many more times after that. The Black Crook is often considered a prototype of the modern musical in that its popular songs and dances are interspersed throughout a unifying play and performed by the actors.

A British production titled The Black Crook, which opened at the Alhambra Theatre on December 23, 1872, was an opéra bouffe with a new story based on some of the French source material that influenced the New York version and with new music by Frederic Clay and Georges Jacobi. A silent film version of The Black Crook was produced in 1916.

The production combined scantily clad Italian Ballerinas with special effects—sensationalism and spectacle, a melting pot of entertainment both high and low. It was widely popular and got more outrageous with each production. In 1868, The Black Crook was restaged by George Washington Smith for the Walnut Street Theatre, where he restored the integrity of the ballet.

George Washington Smith was born in Philadelphia and is deemed America’s first premier danseur. Smith’s talents were developed by studying with various visiting European teachers in his native Philadelphia, then a mecca for theatre and dance. His performing debut

was made in 1832, and he soon grew into a versatile dancer, admired for his skills as a technician, actor, partner, and pantomimist.

Mar 9: The opera Hamlet premieres in Paris.
Jun 21: Richard Wagner’s opera The Mastersingers of Nuremberg has its premiere in Munich.
Edgar Degas creates his oil painting Mademoiselle Fiocre in the Ballet “The Source”.

Feb 24: The impeachment process against Andrew Johnson is initiated.
Jul 9: Francis L. Cardozo is elected in South Carolina as Secretary of State and becomes the first African American to hold a statewide office in the United States.
Nov 3: Ulysses S. Grant wins the 21st presidential election and is later nominated the 18th President of the United States of America.
Nov 27: George Custer leads federal troops in the massacre of more than 100 Native Americans on an official reservation beside the Washita River.

Jul 28: Seward Treaty of 1868 is signed: a landmark treaty between the United States and Qing China.
Sept 23: In the town of Lares in Puerto Rico, an armed uprising against Spanish rule takes place, becoming known as the Grito de Lares (“Cry of Lares”).
The capital of Japan, Edo, is renamed Tokyo after Tokugawa rule is declared over.
Benjamin Disraeli becomes British prime minister.

Jul 9: United States Constitution adopts the 14th Amendment.
Sept 28: The Opelousas Massacre takes place—White Americans in opposition to Reconstruction and African American voting kill an estimated 250 African Americans in Opelousas, LA.
The Ku Klux Klan evolves into a hooded terrorist organization known to its members as “The Invisible Empire of the South.”

Jan 1: William Henry Lewis is born and later becomes the first Black athlete chosen to play on Amherst (MA) College’s football team.
First written account of a football game is played in Quebec, Canada.
The All England Club was established on four acres of meadowland outside London; the club was originally founded to promote croquet.