On February 14, 1952, Louis Johnson performed in Jerome Robbins’ Ballade with New York City Ballet. Johnson starred in Ballade alongside the rising stars of the genre, Nora Kaye and Janet Reed. The musical score was by Claude Debussy and the piece was 13 minutes in length. 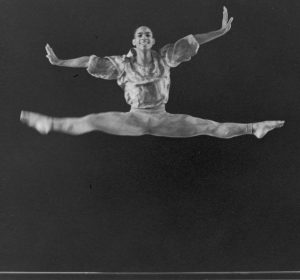 Louis Johnson was born March 19, 1930 in Statesville, North Carolina. He later moved to Washington DC, where he trained alongside Chita Rivera under Doris Jones and Claire Haywood. Johnson then relocated to New York City to study at the School of American Ballet (the affiliate school of NYCB). He refined his artistry under ballet visionaries George Balanchine and Jerome Robbins.