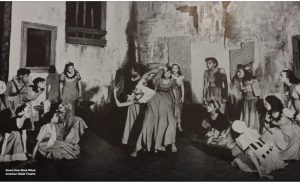 The lack of a singular artistic force was the downfall of the Negro Unit of Ballet Theatre, but it was modeled after a government funded arts initiative by US President Franklin Roosevelt, which was called the Federal Theater Project.

*Note that some sources list alternate spellings for the names of Anne Jones, Clementine Collinwood, and Carole Ash.

Sept 16: The Burke-Wadsworth Act is passed by Congress along with the first peacetime draft in the history of the United States.
Oct 27: Mafia boss and future head of the Gambino crime family, John Gotti is born in the Bronx, New York.
Apr 7: The first Black person appears on a US stamp (Booker T. Washington).
May 15: Richard and Maurice McDonald open the first McDonald’s restaurant in San Bernardino, California.
Jul 18: Franklin Delano Roosevelt is nominated for an unprecedented third term.

Aug 20: Exiled Russian revolutionary Leon Trotsky is assassinated in Mexico City.
Sept 7: 300 German bombers attack in a blitzkrieg (lightning war).
Dec 29: At the hands of Germany, London is attacked in its most devastating air raid.

Feb 23: Folk singer Woody Guthrie pens “This Land is Your Land.”
Feb 29: Hattie McDaniel wins the Oscar for Best Supporting Actress for her role in Gone With the Wind.
May 6: Author John Steinbeck wins a Pulitzer Prize for his novel The Grapes of Wrath.
Sept 12: Near Montignac, France, a collection of prehistoric cave paintings is discovered in the Lascaux Grotto.

Apr 16: Bob Feller of the Cleveland Indians pitches his first no-hitter.
Dec 8: The Chicago Bears beat the Washington Redskins in the Championship with a score of 73-0.